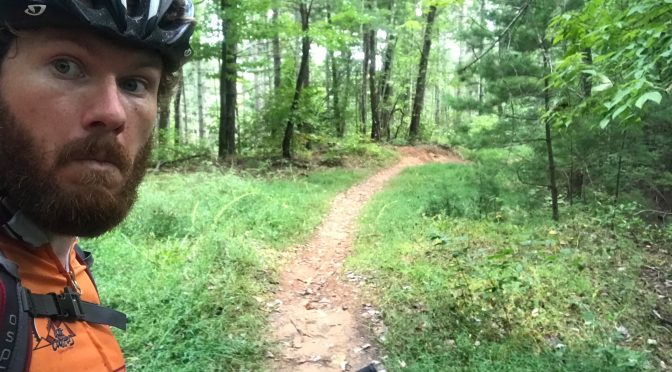 I looked and saw the chance of rain was 0% for the next two days. Today, large raindrops clacked on my windshield and a dense fog surrounded my car. We couldn’t climb because of the weather today but I needed to seize the opportunity for an adventure tomorrow. In my car I have all the tools for an epic adventure: a full trad rack, a sleeping bag and sleeping pad, a hammock and a tarp, and a mountain bike on top. The mountains are open, I just needed to decide what tool I wanted to use to explore them.

I packed up a small backpack with the essentials for a night out: a sleeping bag, sleeping pad, and a hammock, leaving behind a bulky tarp and rain jacket in favor of a single sheet of clear plastic. In case that 0% chance of rain turns, I would be uncomfortable but would survive. I found a trailhead at the far northeast end of Pisgah National Forest, near Asheville, strapped on my cycling shoes and helmet, and started riding south. 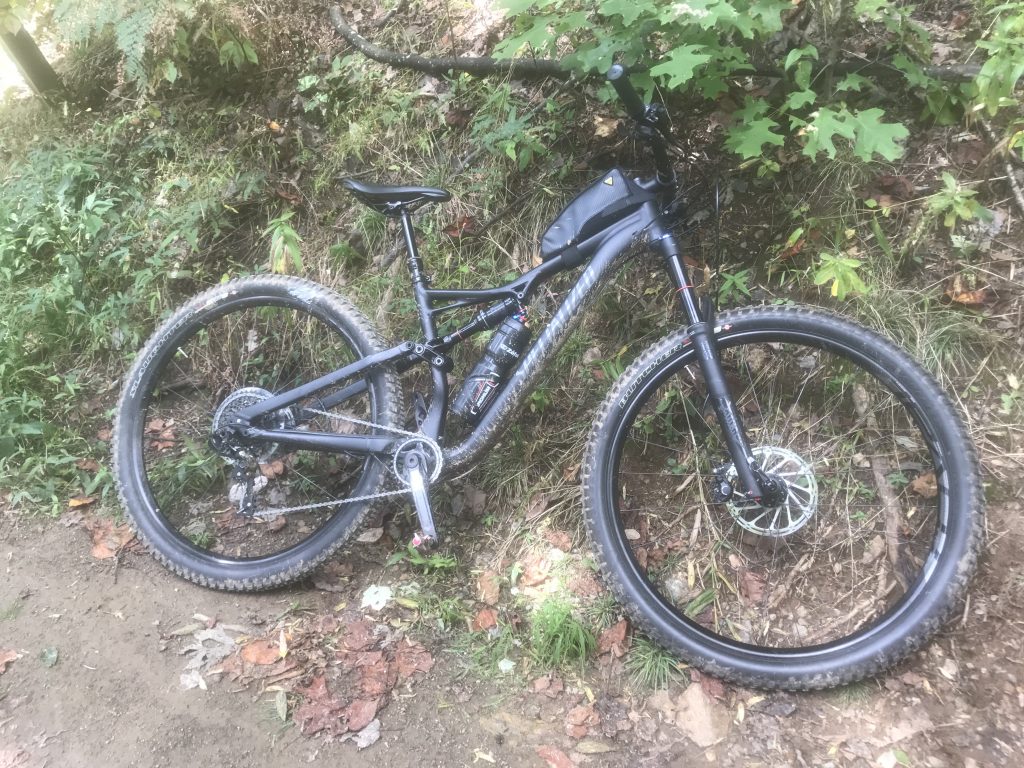 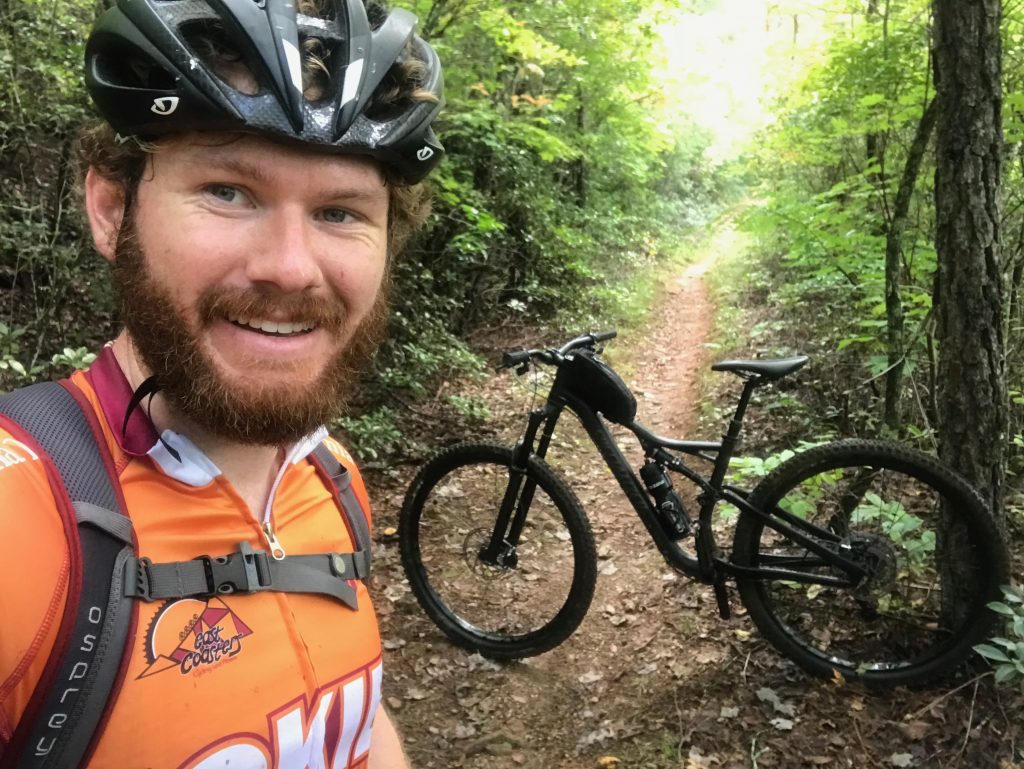 On my new used full suspension Specialized Stumpjumper I found the long climbs on technical singletrack a dream with the long tortuous climbs on gravel an absolute drag. But the killer descents on gnarly rocks and roots was what I live for and the bike slid over all the features. I had to sort some things out back home with school and stopped on a mountain pass to send some quick emails but then was back to the grind to make headway and give myself a solid ride back in the morning.

I found a good campsite on the edge of ridgeline just a couple miles out some singletrack that was just a bit past my abilities on a solo adventure. I set up my tarp and quilt and got to working on a fire to have a warm meal that night. The ground was damp from the night before and I was without my usual lazy bit of firestarter. With a near empty bic lighter and some semi-dry brush and I stubbornly fought to get the fire rolling but continually ended with a smoking, streaming mess. Eventually I remembered that my Chex-mix was flammable and got a bagel chip lit with ease. But just as the chip lit my lighter died. I quickly gathered other bits of Chex-mix and lit them with the flaming chip and before I knew it had a rolling fire but to my dismay had used the last of those delicious brown bagel chips on the fire. 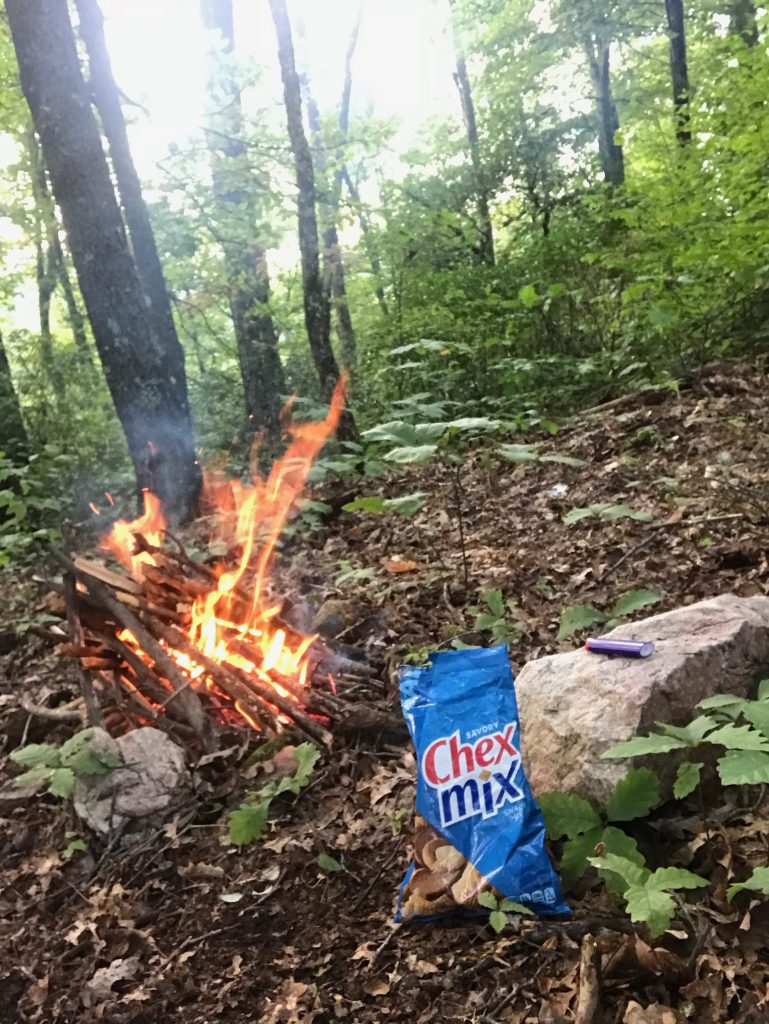 The sunset was gorgeous from the ridgeline and for the first time in a while I would be camping solo in the Blue Ridge Mountains. A couple hours after dark the coyote howls began and after a few minutes surrounded me. Terrified, I threw sticks and stones at the lit eyes that glowed off in the shadows and heard the feet run away. But just a few minutes later as I was beginning to rest again they were back. I reassured myself, knowing the statistics of coyote attacks on people, but still wanted a solid night’s sleep without the rustling of carnivorous wildlife surrounding me. 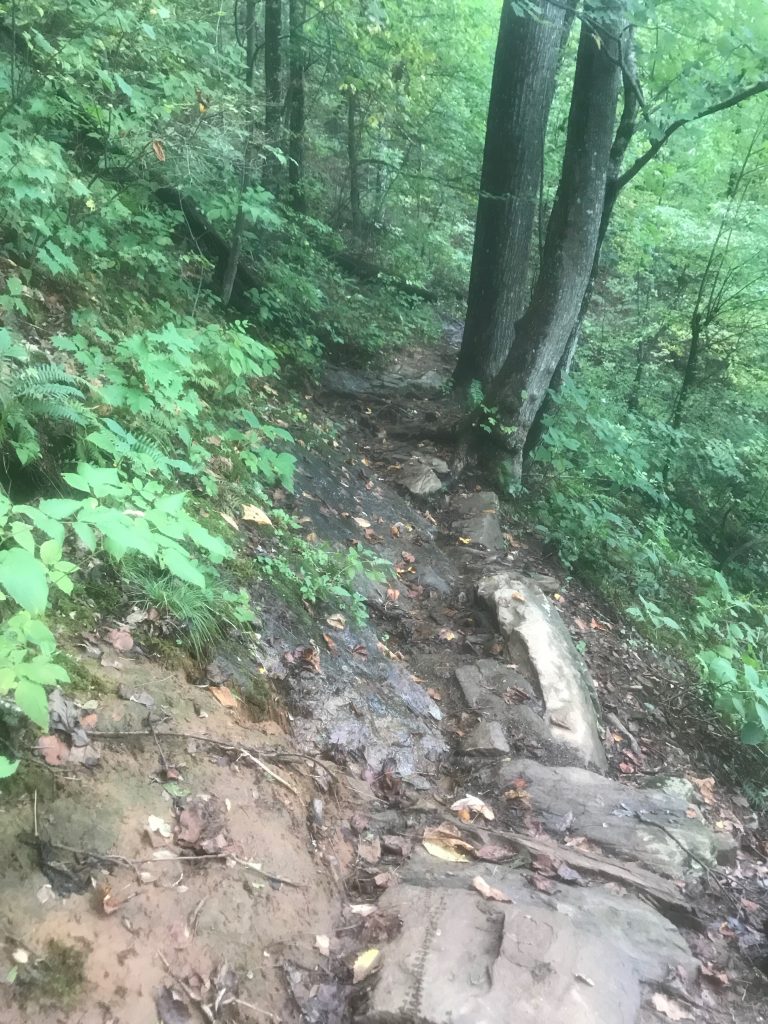 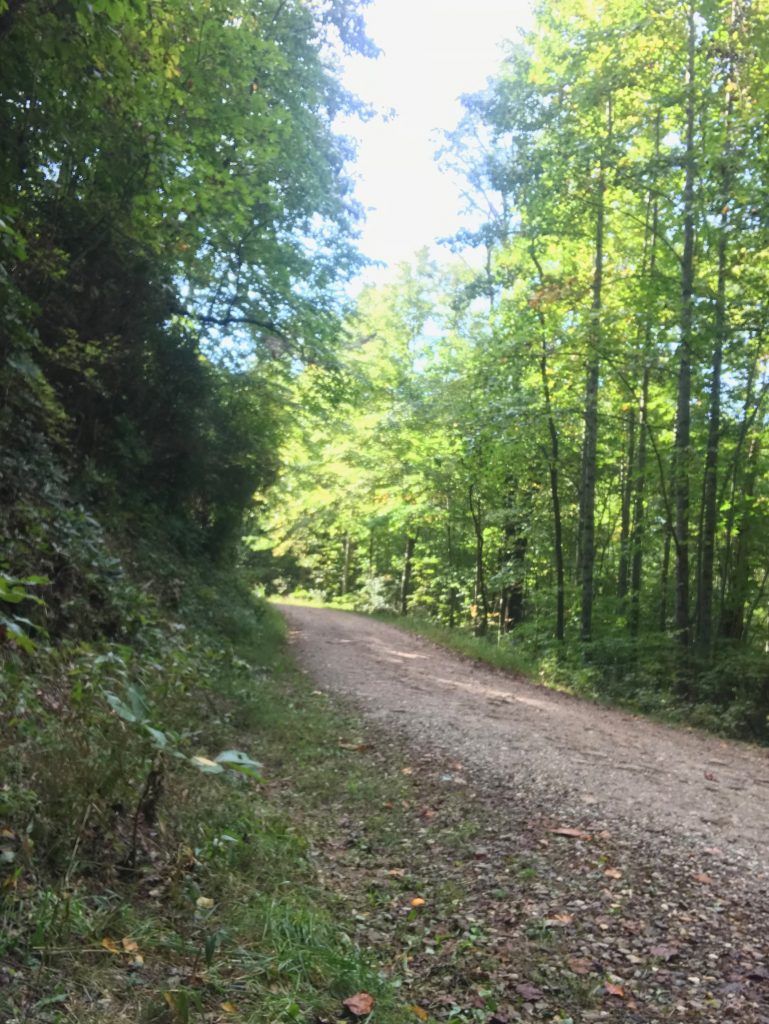 The next day I slept in until the sun crept around the ridgeline and warmed things up a bit, and then took my time packing up. The trails back were spicy on the descent but fun and I knew I was within just a couple miles of a road. The gravel stretches between sections of singletrack were a drag but nice rest for my out of shape legs. And for the final descent back down to the car I picked a beautiful flowy bit of singletrack with good drop offs and pumpy switchbacks. As I was getting close to finishing the ride I looked off to my right and saw an adolescent black bear foraging around in the woods.

It was a nice dabble into bikepacking on singletrack and I’m stoked for the next trip but my god the wilds of North Carolina can be a little more intimidating than our ridgelines of wilderness in Virginia.