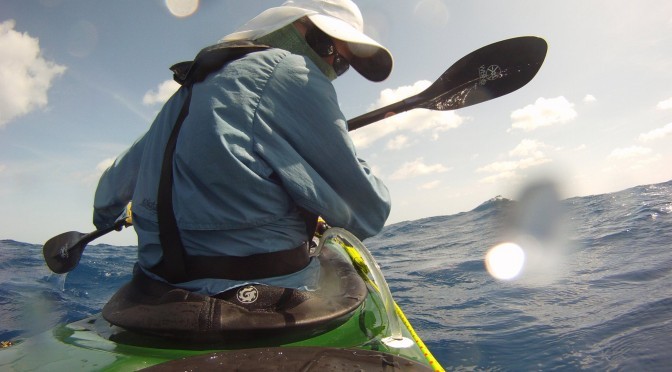 I was on the east side of the Marquesas so I had a few miles before I even reached open water. I paddled through the center of the circle of islands all the way to the west side where I saw three boats anchored in the lee of the island. In the flats I could see a couple fins swaying to-and-fro. I knew what they were but paddled up to get a closer look. A very large 7-8 foot nurse shark was sifting through the murk to find crustaceans. I startled him as he startled me and I continued on my trip. I soon was out into open water and felt the gusts pick up on my back. It would be a tailwind ride the entire way, making for a questionable return in the coming days.

I try to escape humanity, just to catch a glimpse of a primitive world. The ocean is, more than most places, beautifully free of humanity’s mark. But in the most bitter slap of irony, humanity made its presence known in bobbing brown blobs drifting by. I saw maybe twenty of these cylinders of human creation and can only conclude that human poop must have an extraordinary half-life in the open ocean. They were funny to come across, even if their frequency became a little disturbing. Unfortunately, I can’t deny that I have contributed more than my fair share to the ocean going feces.

I had told myself to not look back before I was ten miles off shore. So when my GPS signaled the moment, I turned around and there was nothing but blue on the horizon. It was a good decision and a practice I’ll probably continue. It is far too overwhelming to watch the sign of stability, the place where humans are welcome and safe disappear in the distance. I can’t say I’ve ever experienced anything so disconcerting. Out in the ocean there is nothing but blue, nothing to hold onto, no knowledge of the safety that may lie just over the horizon, and certainly no guarantee that anything is there. But, surprisingly, once out of sight of land, I found the situation very comfortable and not distressing in the least bit. I simply thought I might as well keep going.

Once I was well away from shore, a fishing vessel popped up in the distance and I came within a couple miles to the North of it. I knew if they saw me they would worry and feel obliged to make sure I was okay. In hindsight I probably should have called on the radio to let them know I was okay but at the time I just wanted to keep paddling. I hoped they were busy and would not see me, but I imagined them on deck, running below to pull the other guys up, “Look at this! There’s a kayaker out here!”

I saw them drop their dinghy into the water and begin racing over to me. They arrived just minutes later, a distance that would have absurdly taken me nearly half an hour to travel. “Are you okay?!” he asked with a certain tone that it seemed less a question of my comfort and more a question of my sanity.

I signaled back with the okay sign and shouted “Yes I am fine!”

As he got closer I could hear him better and he repeated the question, asking me if I was sure that I was okay. He undoubtedly thought I was mad, paddling off into the open ocean. But then he asked where I was heading, I said the Tortugas, and at that point he seemed to fully understand the extent of my madness with a sort of “this guy is beyond saving” kind of acceptance. I thanked him very much for checking on me. It was an incredibly kind gesture and one that I have experienced every time I find myself well off shore, in the dark, and/or in rough weather. Mariners have all been extremely welcoming and helpful.

I continued on my trip and it would be my last human interaction till I reached the islands. I could see the tops of boats skimming by in the far, far distance, but for the most part the horizon and even the sky was entirely empty save for an occasional sea plane heading or returning from the Tortugas. Enormous sea turtles popped their heads up everywhere and I estimate I ended up seeing over fifteen of those ancient reptiles. They were beautiful, and so cool to share the ocean with. I did get concerned when one swam up directly in front of my bow and I came within inches of colliding with his thick skull. But they are incredibly quick animals, unlike their land bound brothers, as well as being absolutely tremendous, way larger than I ever imagined. I paddled over schools of flying fish and they would skip off in every direction. I stopped paddling and watch this incredible procession every time, wings wide open, silvery bodies streamlined, gliding just over the surface till they quickly dove back into the ocean. They are incredible creatures and the kind of beauty that makes life worth living, especially the kind of life exciting enough where one finds oneself in the open ocean alone in a kayak.

The water remained shallow and green for nearly half my trip but before long I dropped off into deep blue water and the swells rose behind me. With following seas, my bow was getting pushed in every direction besides where I wanted to go and I spent a large portion of my energy trying to maintain my heading. The swells got bigger and bigger and before long were towering over top of me, whitecaps littering the horizon and the occasional breaker keeping me alert. I didn’t want to stop paddling, and frankly was surprised at how easy everything was going. Besides a sore butt and tense legs, my arms were fine. It was hot and I continuously rinsed myself with the salty water to cool off, dipping my hat in the chilly deep water and returning it to my head.

But after six hours with nothing to eat, I was getting seriously hungry. I thought I might get the nausea and headaches of motion sickness if I stopped amid the bobbing seas so I continued paddling. But before long I needed sustenance and stopped for a short break. I deployed my outriggers to stabilize my boat and reached into my day hatch for some food. I ate as quickly as possible but within minutes was feeling the effects. By the time I got paddling again, I was desperately ill, a serious low point of my entire life, as anyone with seasickness can attest to. Add the torture of seasickness to solitude in a tiny vessel and it becomes an unfathomable challenge.

I contemplated my vulnerability out there, because this was certainly the closest I came to real danger during this brief adventure and any little ailment in such an unforgivable place is disheartening to say the least. I hated everything and the thought of continuing to paddle made me hate everything more. But my arms were still moving so I realized that I didn’t have to think about paddling, I just needed to do it. And besides, the only alternative was to slip down in my boat and get even more seasick. So I decided to count out the miles to ten. My watched beeped at every mile, every 12 minutes or so. One. Two. I knew I would be getting close to seeing it in the distance at this point. The ferry coming from the Tortugas had raced by four or five miles to the North, carrying a bunch of settled passengers, probably not even seeing my minuscule blip of a vessel in the distance. Three. The time was flying by and I hardly even noticed my illness at this point. Four. It was nearly gone and I felt almost 100%. Five.

“What is that?” I thought as I stared at the horizon. Channel markers had tricked me before but the haze gave it away that whatever I was looking at was really far away. It was really far away so it must be really big if I was seeing it at this point. Six. An ear to ear grin stretched across my face. I stopped paddling for a moment with utter enthusiasm at my confirmation that the Dry Tortugas do exist and I was successfully navigating toward them. It was the lighthouse on Loggerhead Key, way in the distance, but absolutely 100% real and in the right direction. I was ecstatic. I saw Fort Jefferson next and then boats in the harbor, and then soon, tiny colorful tents on the beach. The remaining dozen miles went by so quickly they didn’t seem to exist at all. Before long I was skirting around the reefs and paddling into the harbor.

Just as I was nearly at the beach, I had to yield to a Park Service boat towing a homemade boat full of fourteen Cubans to shore. I learned later that they had been out in the Gulf Stream for three days in their ten foot vessel made of rebar, tarpaulin, and closed cell foam. It made me appreciate how fortunate I am simply to have been born where I was, a place where going on such adventures is entirely voluntary and for entertainment, not to flee an oppressive government. I had done it, I was the first person to make it from Key West to the Dry Tortugas kayaking.