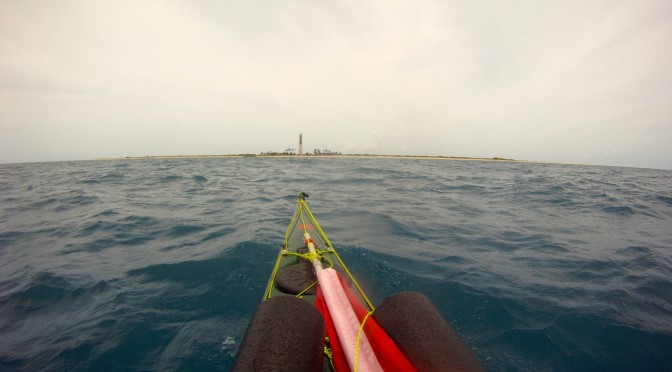 It’s hard to understand the months of preparation from any other vantage than my own. They think I just thought of the idea of an open ocean paddle to the Dry Tortugas this morning, and they think I am crazy.

He asked me how far I was going to be paddling out and I responded saying I was headed for the Dry Tortugas. “Do you know how far that is?” he asked with a concerned expression on his face.

I laughed and said “yes, yes I do”. It is a common silly question in a long list of them that I have recently become accustomed to. Minutes later, as I prepped my boat on Higgs Beach in Key West to set off for my open ocean voyage in a standard kayak, another man walked up and asked me if I was training for something.

“Actually, I was training for what I’m about to do right now,” I responded.

“What is that, like 75 miles?” he asked after I told him my goal of reaching the Dry Tortugas. When I confirmed his estimation, he reached his hand out to shake mine and said, “Best of luck to you brother. Sounds like a great adventure.”

The first day was truly the worst. Being only a 25 mile leg to the Marquesas Keys, I didn’t expect this. But 25 miles of paddling in the baking hot tropic sun is no easy feat. On the following day, the water would deepen and cool, but in the shallow flats of the western keys, the water was bathwater warm and cooked me from below.

It was good to get out there though and I soon watched Key West slip below the earth’s curve and fully realized I was doing this. The extent of the adventure set in and I was thrilled.

I had waited three weeks for the wind to clear and allow safe passage over to the Bahamas island chain. I tried with less than ideal conditions twice, once with north winds and scattered thunderstorms which littered the horizon in the early darkness around Key West. I turned around with little hesitation but serious disappointment on that attempt. But the main thing that overwhelmed me besides the objective hazards of big swells and high voltage electricity was the sheer terror of what I was attempting: an open ocean crossing, of not unfathomable distance to a foreign shore in total solitude. It wasn’t crazy; it was just a stack of unknowns that made the physical discomfort a little too much to bear. I sat on the beach that morning for three hours, watching the lightning ravage the waters around me. The wind picked up and I knew it would throw me to the Bahamas like a slingshot, and would be a thrilling ride. I couldn’t do it though. My heart was racing and my mind was no longer in it. I was scared and I wanted to be home, safe under a roof, not out on squally seas in a 21 inch beam vessel.

The next time I built up enough impatience to say screw it, and left from the middle keys with NE winds and big, big seas. The sailboats had their sails reefed and fishing vessels of twice my length were staying in shore. People entirely underestimate what a kayak can handle though and in the 10 foot swells, gusts up to 30 knots, my boat handled great. I was only worried about my personal ability to endure, and rightfully so. Balancing and course corrections alone in that kind of ride is exhausting, not to mention the need to make forward progress at a somewhat decent clip. Had I had some dramamine to keep my stomach steady I may have kept going. But I knew as soon I stopped, I would be vomiting over the edge. I paddled straight for four hours, and then it took me another four hours to return.

The next attempt can hardly be classified as such by distance. But mentally I think it was the most enlightening one. The conditions could not have been any better. The wind was still as could be and I was prepared for a smooth trip across the Gulf Stream and to my destination. I made it about four miles out before the fear consumed me. I kept looking back, considering turning around, being safely on shore in an hour behind me versus dangerously camped on an uninhabited island in 12-16 hours time. And I did turn around. It was hot, really hot, and I underestimated the morning humidity. But most importantly, I learned about myself and my fear, the real thing that kept me from crossing that day.

I got in my car a couple days later to return home, abandoning my goal not because of the weather but because of my inability to manage the inescapable fear of attempting such a long open water voyage. My parents of course were thrilled, but something felt seriously wrong. I made it to Key Largo before my hesitation made me pull over. I couldn’t just drive home, not yet.

I remembered a trip that I considered in the winter, Key West to The Dry Tortugas. Yet another untouched adventure, and a domestic one at that. While I would find no fresh water there, I could expect companionship and comfort upon arrival at the small Dry Tortugas National Park seventy miles off the coast of Key West. Compared to the hostility of arriving at the uninhabited island chain of Cay Sal, this seemed a little less intimidating. I checked the weather and the wind would be perfect the following three days. I turned my car around and headed to Key West.

It was still scary, and I still considered the serious consequences of what I was doing, but I was ready for it this time, ready for the mental battle that would come when I slipped into that boat and sealed the spray skirt.

I made it to the Marquesas to a quickly dropping sun and an island with less than ideal camping. I set up on a beach above the high tide mark and slept in a clearing below a small tree alongside some mangroves. I ate dinner, sealed up all my food in the boat, and moved to my tent in the brush. The night would prove to be one of the most brutal I have experienced, with giant nocturnal land crabs, among other creatures, attacking my tent throughout the night, and the scorching 90 degree heat and high humidity preventing any comfortable sleeping. I lay with my limbs as far apart from each other as possible only to have a crab come clawing at my outstretched leg or arm every half hour.

All night I wondered if I should take a rest day before the open water voyage or if I should just gun it. But the morning rolled around, and acknowledging I was in good shape and couldn’t stand another night on that hellish island, I decided to give it a go.