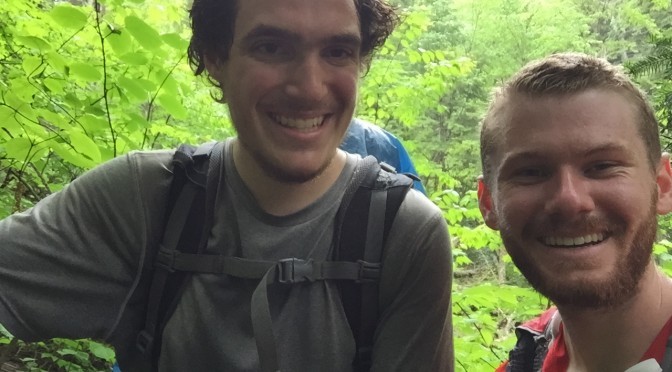 The rain poured nearly all night. But in the four walls of Lonesome Lake Hut, I was warm and comfortable and thankful to have put the high exposed summits behind me. Only one climb above treeline left and the tame round summit could only be but so bad.

I woke up when the hut crew began preparations for breakfast. Startled, I woke up to a smiling face working around in the kitchen. I looked up quickly, already guilty for having snuck in the previous night and apologized sincerely for coming in. She reassured me that she could understand and told me it was okay. I was exhausted but I knew I needed to get out before the guests started coming in. In the heavy rain it didn’t look like anyone else wanted to get out of bed but I had no choice. I packed up quickly and put on my poncho and began working my way up Kinsman Mountain. I was surprised and frustrated to once again find a gnarly climb up the steep face. Exposed granite alternating with deep mud made the morning exhausting and by the time I made it to Kinsman Pond Shelter was close to collapsing and falling asleep along the trail. I hadn’t gotten enough sleep last night for the long 17 hour hiking day yesterday and needed a refreshing nap.

I rolled in, undid all my stuff again and was asleep within seconds. I woke up an hour later to much fading rain and got back to hiking. Not a good start to the day but I figured I had plenty of time to salvage a solid mileage. But when I made it down to Eliza Brook Shelter just a few more miles away the rain had returned in earnest. I lurched over to the shelter, grumpy and uninspired and ready to lay down again. Back in civilization I would struggle on a gloomy, rainy day like this. And normally when I backpack the day has plenty of hours for me to sit out a storm and wait for clearer skies. But on a record attempt, there was no time for this. At the shelter a NOBO thru-hiker was in his sleeping bag and hadn’t moved since he arrived the night before. I was so envious but knew I couldn’t join him. I sat down on the shelter ledge and talked to him for a bit. He told me how he had done a 37 miler down south just to see if he could but couldn’t imagine doing it again the next day. I asked him if he had met a hiker with the trail-name Ironman who was a friend of mine from undergrad. He told me he was just a few miles behind him. It was exactly the pick-up I needed to get me going. I hadn’t seen a familiar face since I started and to know I would see my friend Matt aka Ironman by the end of the day really pumped me up. And I wouldn’t dare let him find me laying in the shelter being a blob letting the record slip away. Time to get up and knock out some miles.

I ran into Matt a dozen or so miles later on the climb up Mt. Moosilauke. I was so happy to see him and after brief conversation wished him the best of luck and hoped we could catch up and share stories once we both finished.

Mt. Moosilauke is notorious for being one of the toughest climbs for SOBOs but I was so happy that it wasn’t actively raining that I didn’t care. When I had climbed this mountain six years ago I had climbed up in the pouring rain well past dark and a torrential waterfall flowed down it. The trail is so steep in places that the waterfall was flowing over my head and body and drenching my pack. When I made it up to Beaver Brook Shelter to get a good night’s sleep I was surprised to find a party of group of hikers partying with no intentions of slowing down because of my exhausted self arriving.

But this time I rolled past the shelter and up the summit. The top was well in the clouds so visibility was probably 100 feet but I didn’t mind. It wasn’t raining and after this I wouldn’t have to worry about getting caught on the north side of a dangerously exposed summit again for the rest of the trail. It was getting late by the time I started the descent and I couldn’t be more bummed about my slow progress for the day. I was noticeably tired from the previous day and desperately needed to do a better job covering the miles more quickly so it didn’t run into my sleep this early in the trip. I had expected long days up north on the harder terrain but had never anticipated hiking 16-17 hours day after day. Down south I knew I could easily cover even 45 miles in little over 15 hours and I was so ready for those shorter days and a longer night’s sleep.

I needed to pick up a mail drop at the Hikers Welcome Hostel just a short distance off the trail in Glencliff but was unsure whether I would stay the night. At only 22.9 miles in, it would make for a short day but I knew the terrain into Hanover the next day was smooth sailing. I justified staying at the hostel saying that I would get a better night’s sleep and it would be nice to get a shower but I really should have kept going. I learned a lot on this trip and one of those things is that privacy is extremely important for success on this record. Shelters and bunkhouses are great for a normal thru-hike and the social aspect can be extremely refreshing. But I ended up enjoying stealth camping off in the woods alone a lot more than the risk of dealing with late night partiers at a shelter. Everyone at the hostel was very nice and respectful, it was just that we were on different schedules. But I stayed, and went to bed late and with my phone charging downstairs had no alarm and woke up later than I intended. Live and learn. But at 6:30 I was working my way back to the trail with only a day’s worth of food. I was going to make it to Hanover tonight, or at least close. My rations simply didn’t leave me another choice.