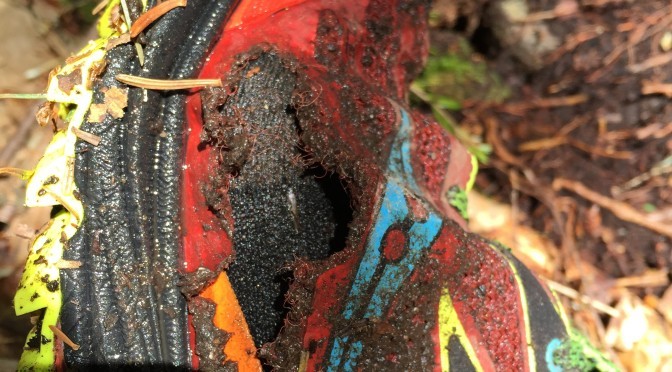 Marni and Eric had prepared me a huge breakfast that I could heat up and eat before everyone else was up so I didn’t have to wait. It was a huge help. Also at the hostel was a guy, Will, who was the first SOBO thru-hiker to hit this point. He had taken a zero yesterday and we caught up over pizza last night. He had gotten in touch with me before we started and exchanged notes on gear and diet. I had told him about my shoes getting ripped up from the mud and rocks in Maine and showed him the four inch gash in the side. He told me he had mailed himself a pair of shoes but was going to continue hiking in the shoes he was wearing. They were exactly my size and he was just going to leave them in the hiker box. It couldn’t have been better luck and I am seriously thankful to him for letting me wear them out of Gorham. I had been worried about my shoes which looked more like sandals at this point. My next pair wasn’t till northern Vermont and I highly doubted this pair would last that long. I had clean, new Darn Tough socks waiting for me in this mail drop and getting Will’s shoes were an amazing addition.

I put on my music in the first mile. I hadn’t had it for the last couple days so it was a nice distraction from the tremendous climb to the summit of Carter. I want to give thanks to Hans Zimmer for carrying me through some pretty tough moments on this trip. The song below was on repeat up Carter and it absolutely pushed me up the mountain.

I was happy to be in the White Mountains but more excited about the clear skies. The weather was about as good as it gets and the flood of day hikers out supported that. It was wonderful seeing clean, smiling faces out there, bringing the reinvigorating excitement for the backcountry that I had all but lost on Baldpate Mountain a couple days earlier. Down at Carter Notch Hut I delivered the letter given to me by the caretaker of Speck Pond Campsite the day before. I thought that must be the fastest delivery they’ve ever had, overnight mail in the mountains of south Maine and White Mountains of New Hampshire. And low cost too, at only a Snickers Bar. I was happy to do it. It gave me another purpose, another reason to continue, and the weight was negligible.

I descended down Wildcat in the afternoon, feeling the pounding on me knees with each tremendous step. Down at Pinkham Notch I picked up another mail drop. I had sent myself one to the Hostel and one to Pinkham Notch just 20 miles or so later just to keep from carrying a full load of food for that first part of the day. It worked out well with me only carrying 6 or 7 pounds for the bulk of the day’s hiking. I loaded my belly with ice cream and bought a little tube of sunscreen to keep me protected up above treeline for the next few days.

I checked the weather at the visitor’s center and saw some ugly weather was rolling in that night and into the next afternoon. It was getting late but I knew I could get over Madison by nightfall if I hurried. Unfortunately, the work for stay situation at the huts made me feel uncomfortable with coming in just before lights out at the hut. I also had a grudge against Mt. Madison when six years ago I had run out of water on its slopes and became seriously dehydrated well before the summit. It is a gnarly climb, probably only second to Katahdin for SOBO hikers, and likely my least favorite on the entire trail.

With a belly full of ice cream and the terrain slowing me down more than I had anticipated, I opted to stay in the valley that night at Osgood tentsite and summit Madison the following morning, a decision that in hindsight, I certainly wouldn’t have made again.