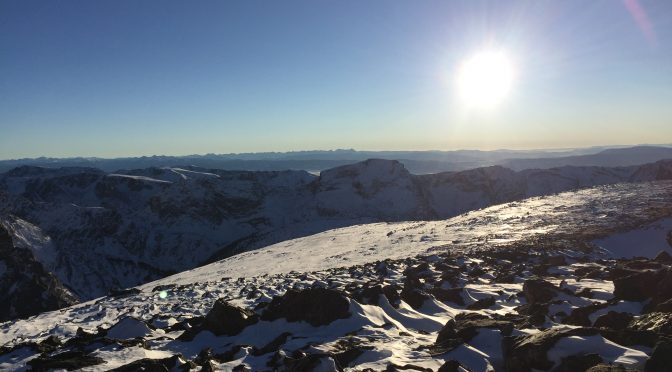 But when I stepped down into this untouched snow gully, I sank up to my hips. The snow was loose powder and I knew it could calve off and slide at any minute. But it was my way out. I counted on the narrowness of the gully and the steepness of the slope to be my savior. I figured it was far too steep for an avalanche but knew it could still slide. At this point the grade was so steep I was practically climbing a wall of loose snow concealing firmer ice below.

With the powder so deep, I swung my axe and free hand at the snow to clear a path of solid ground beneath it. Then I planted my axe for a self belay, shoved my other hand as deep into the crust as I could, and kicked two short steps up. Sometimes I would step and the snow would sink back down further than my original step. The going was horrendously slow and as much as I wanted to rush it, a quick turn of my head back down was enough of a reminder to stay in control and pace myself. This couloir was overtop of a massive near vertical drop so any slip would practically without question be fatal. Of course this wasn’t going through my mind at the time. All I was thinking was how messing up simply was not an option.

The going was grueling and I was overwhelming exhausted at this point. My calves burned from trying to keep the front points of my crampons shoved into the snow and my arms ached from swinging my ice axe. I wanted so badly to teleport back home and be laying on the sofa with my family watching football. I reassured myself that I would never do anything this stupid again and with the summit so close felt much more comfortable with the prospect of seeing them again. I wanted to hug everyone who has meant something to me in my life. I thought about my friends, every single one of them, passing through my head with each swing of my axe.

I continually fought the urge to lean into the slope. It was irresistible to want to hug the ground but what it does is shove the feet out toward empty space and torque my crampons off the footholds. So I stood upright, and kept moving up. It was painfully slow, probably took me and hour and a half to two hours to clear the snow and step up, clear the snow and step up, over and over for the last 100 feet. The grade continued to steepen the entire way. I looked over at the rocks above me off to my left; they glowed orange from the setting sun. I desperately wanted to feel that warmth which had eluded me for nearly the past 5 hours but fought the urge to rush.

Within feet of the summit, I could throw the pick of my axe over the top now, but the deep snow ahead of me formed a cornice, or overhanging edge of loose snow, above me. I took my axe and chopped away at it, snow falling into my face and down my jacket until eventually I had carved out a lip which I would be able to shimmy over. I kept working my feet up, looked over and felt the sun on my face. I threw the pick of my axe over the edge of a planted large rock, reached my hand over the edge of another, kicked steps up, and pulled myself over the top like a beached whale, struggling to lift my exhausted body over the top.

I crawled away from the edge, stood up, and screamed incoherently with joy at the top of my lungs. In between screams I sobbed. Tears of joy and shame and appreciation and elation and comfort streamed down my cheeks. I screamed obscenities as loud as I could, cursing the dumbass who got me into that situation and excitement for the person who worked through it.

My frozen hands and feet began to thaw and the shooting pain overwhelmed my elation and I put the celebration on hold for a few minutes. I sat, waddling back in forth, hissing and cursing to ease the pain, waiting for my digits to warm and the feeling to return. I hadn’t noticed how cold I was on the climb but now that I was safe, all sensations were coming back to me. Once warm again, I exchanged crampons for snowshoes, and my ice axe for poles. I walked over to the edge and looked down from where I had come. I leaned as close as I was willing and could hardly see my steep path dropping off beneath me. I cried some more, so thankful that I made it and so ashamed at what I had done. I felt pride for being self-sufficient, but embarrassment for being scared to admit I was in over my head and call for a rescue.

With a second wind I started working my way toward Hallett Peak and a simple descent down to my car. But with the sun rapidly setting, I committed to descending Andrews Glacier, a known route that would be easy to follow in the valley, over trying to trace the ambiguous, featureless zig-zag Continental Divide in the dark.

I stood at the top, ready to begin my descent down Andrews Glacier and had the sinking feeling that my day wasn’t over yet. It was steep, not Taylor glacier steep, but steep enough that a fall could easily be fatal. I once again exchanged the snowshoes for crampons, and poles for my axe and started working my way down. Normally I would have simply sat down and glissaded down but in the dark I had no way of knowing where the loose boulders and steeper sections were exactly. I settled for alternating between plunge stepping as best I could in the dense snowpack and down climbing facing in, kicking my front points in for purchase. It was really crappy, slow moving, and exhausting but was manageable and that made me feel okay. In the dark everything was terrifically eerie. I was entirely alone on a massive glacier that in the spring and summer could be covered with visitors. But with no obvious tracks leading up to it this late in the year, no one would think anyone was up here.

Andrews Glacier fluctuated in steepness and I hugged the shallowest grades. I wasn’t in the mood for any technical climbing anymore so I worked my way around to the easiest parts. But with my headlamp only lighting up maybe 30 feet in front of me, I could only guess as to the best route down.

But finally I made it, with calves ready to give out on me and my mind losing its grip on reality amongst the strange shapes illuminated by the tunnel of light. The glacial pond at the base was covered in a thick layer of ice which had been cracked and shoved up by the descending glacier. The ice was awkward to walk on but fascinating how much it had shifted since it froze. At the end of the pond I switched back to snowshoes and poles and started navigating my way back to the trail. The orienteering would be easy; if I wasn’t going down, I was going the wrong way. But the actual physical exertion with no set tracks and no obvious trail ahead was going to be grueling.

At the base of Andrews Glacier, I either lost the trail within a few minutes or was never actually on it and settled for bushwhacking straight down the valley. I traced the faint trickle of glacial melt underneath a thick blanket of snow. The seeping water kept me oriented and I knew it ran into the familiar trail I had been on earlier in the day. But the sides were lined with deep, unstable snow, thick bushes and vines, downed trees, and steep banks. It made for clumsy and difficult hiking but it was safe and I knew I was going the right way so I kept pushing on.

With the woods thickening the further down I went, I eventually saw the flicker of a light ahead of me. I thought for sure there wouldn’t be any other dumbasses out this late but sure enough the light flickered again. Then I saw the beam glance up at me and then look back down. I headed straight for it and as soon as I knew I could be heard, I called out. I desperately wanted to converse, to feel oriented again as to who I am, and what this place is, to have some witness that I did actually survive and hadn’t somehow slipped into some hellish realm. To me it felt like I had just been born and craved human interaction. To him, he probably thought I had gone mad.

We sat down on the sides of the trail. He was trying to find a place to camp on his map and I was taking a break and breath of relief. He was from West Virginia and was studying down in Boulder for his bachelor’s degree. We talked and laughed and he told me he had watched my headlamp work its way down from the top of the glacier. I wanted to cry and hug him but refrained from burdening him with the woes of a crazed stranger. Instead we talked about ice skating, the beautiful weather, studies, life in Colorado, and then we parted ways. I said goodbye and started working my way down again. I powered through the gradual descent over the packed trail and was back at my car before I knew it. I smiled the entire hike back and couldn’t wait to call my parents just to hear a familiar voice and tell them I love them.