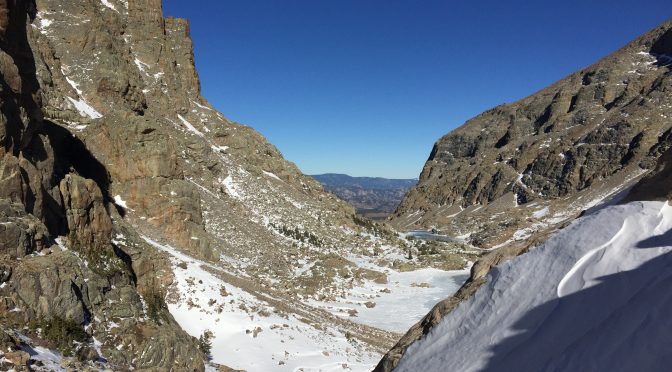 I worked my way up the shallower lower slopes beneath Taylor Glacier through deep powder with my snowshoes on and trekking poles in hand. The snow was deep and fluffy so the going was easier with some flotation on my feet and something to balance in my hands. But when I turned around I realized I had already ascended my way onto something so much steeper than I felt comfortable with. A slip on this grade on the slick ice of Taylor Glacier would mean broken bones at best.

I shimmied my way over to a basketball size tip of a boulder peeking out and straddled overtop of it with my legs practically dangling off either side. I carefully removed my snowshoes and collapsed my poles, knowing that if they fell they would be at the bottom in seconds. At this point I was probably 900-1000 feet of vertical above where the slope leveled out. It would be a hell of a fall. I tied my ice axe leash to my hand and shoved it into the icy snow for a self-belay. If I fell, at least I could somewhat count on that snagging my wrist and keeping me from falling further. I strapped on my crampons, feeling my weight shift from one hip to the other and worried about losing balance off the side of the rock. 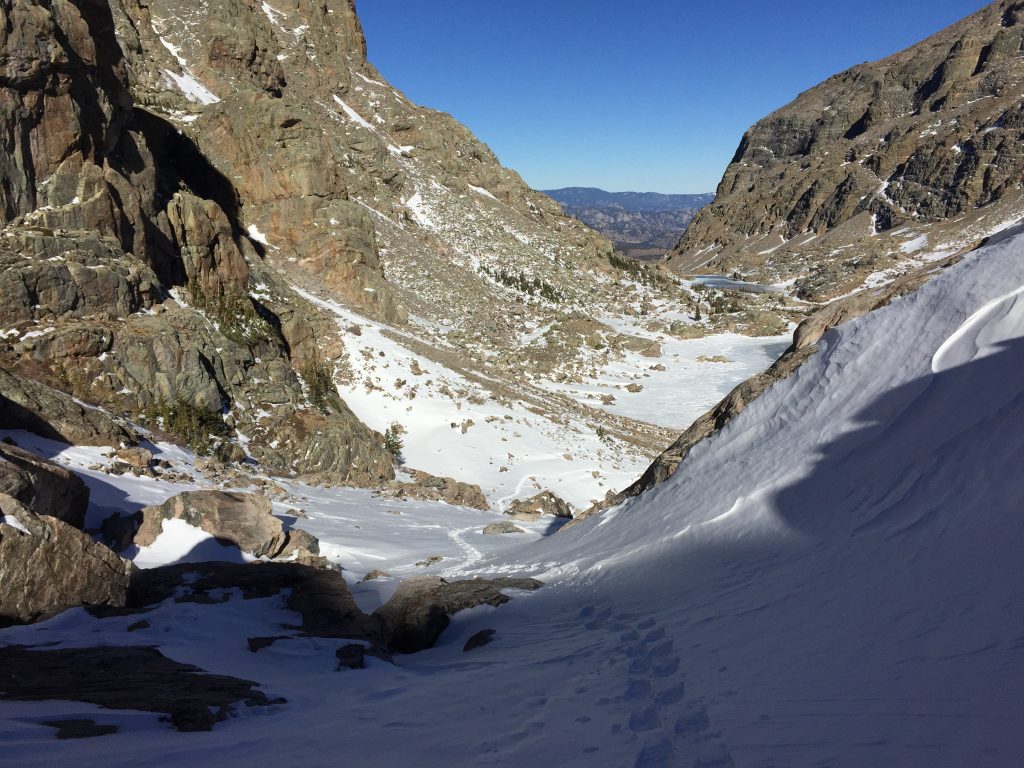 And then it hit me. With scattered boulders and sheets of ice, scree, and powder snow below me, a fall would be crippling, if not fatal. I’d had my helmet on since I began the climb but wasn’t sure how much good it’d do at this height. My heart began to race and a sinking feeling of vulnerability overcame me. My breathing hastened and I knew I had made a huge mistake. “I shouldn’t be up here,” I thought. “I want to go home.”

I pulled out my phone to see if I had service. With one bar I gave it a shot to call my dad. I would ask his advice, knowing that he would certainly tell me to press the SOS button on my Spot Satellite messenger. But at least I would know I’m not alone in my fear and that my parents knew where I was. But the call didn’t go through. Without anyone to support my decision to call for a rescue, I was left to navigate through the cloud of indecision on my own. I sat with my phone in one hand and the Spot in my other and thought. I knew the way down was gnarly and horrifically dangerous. Down climbing is inherently dangerous even without the element of fatigue. It’s rarely practiced and is awkward and unnatural. But I still couldn’t see the top of the couloir and figured the snow field continued to the top. It seemed navigable, albeit with tremendous consequences for a misstep. At this point, the consequences were high either way, but the known route was without question horrifically dangerous. I decided to keep heading up toward what I hoped would be a straightforward and steady march upward. I put my phone away, hung onto the rock and kicked my crampons into the snow.

I kicked steps up the steep slope of Taylor Glacier for another couple hundred feet. But when I looked up, the couloir revealed its final moves: a near vertical rock face covered with fragile, thin, scattered ice. I planted my axe for a self-belay and keeping my hips out, leaned over it, and gently mumbled curses at myself. I maintained my composure and stayed relaxed though. As long as I was in a dangerous situation, I was keeping it together. I looked off to my left and saw a slab face of category 4 climbing and worked my way over to it. I knew at least the grade here was shallow enough and I could get take a rest on one of the many ledges covering its chossy, crumbling, face. But the closer I got shimmying over, the shallower the snow and ice beneath me got. Eventually my crampons were cracking through the ice onto a scree field, or field of of small, loose stones with no solid purchase. I took one last step and reached for the rock with a cold bare hand. I grabbed a solid jug and pulled my weight onto the rock and stepped onto a ledge and sat down. 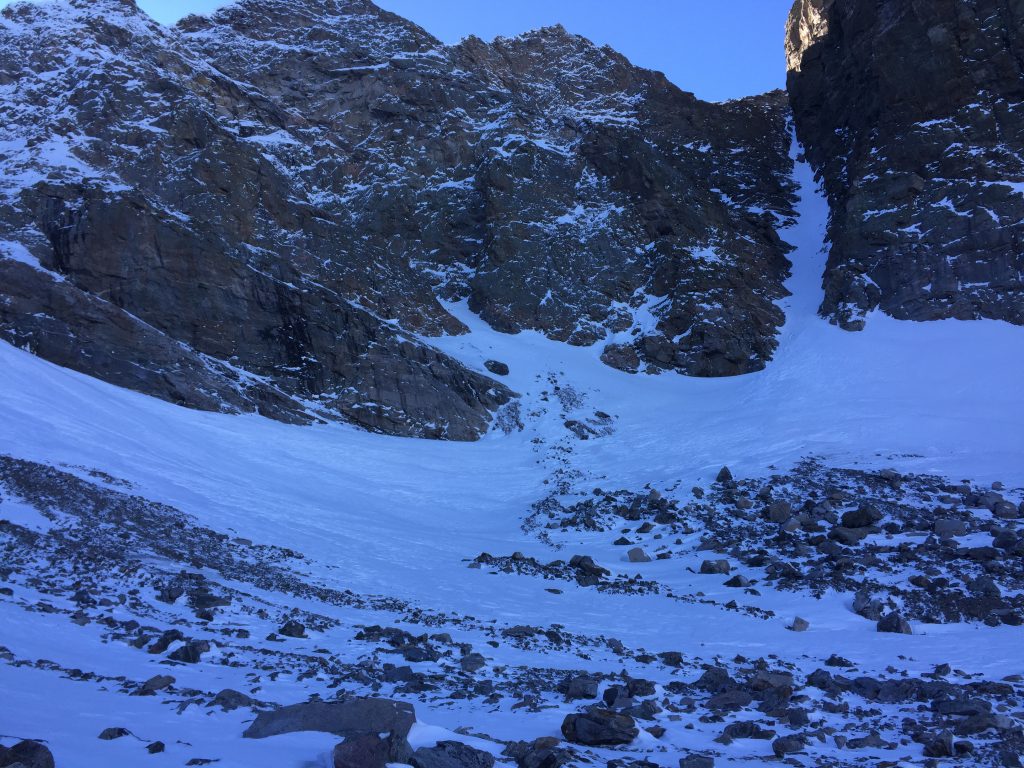 The second I knew I was safe again, my heart rate sped up and I started hyperventilating. I looked down at the ridiculous drop and imagined my body skipping off the rocks below like a rag doll, limbs flailing with each tumble, skull shattering on the rocks. I pulled out my phone to try my dad again. I wanted to tell him I love him and get him to relay that message on to my mom. I knew my dad could keep it together and help me keep my composure so I was content on just talking to him.

But with no luck again, I was stuck making my decisions without input from a third party. I pulled out my Spot and stared at it. I looked up at the orange sunlight glancing over the summit and back at the Spot. I was so close. I didn’t know how I could live with myself needing what would certainly be an elaborate rescue. And to be honest, I’m not sure how long I could survive the near-zero temps while hanging onto a narrow ledge with no sleeping pad or bag, and only a thin bivy to crawl into.

And that’s what kept me going, the fact that I knew no matter how crappy this situation was, it could get worse even with a rescue. I settled my breathing and started typing the note at the beginning of my previous post. I was committed to getting myself out of this, for better or worse and wanted everyone to know exactly what happened if the worse resulted. I typed with freezing digits, put my phone back in my pack, stood up, and worked my way up and over the slab of rock.

I had crampons on which grab every little nook in the rock but for someone who has little experience with mixed climbing, I was totally clumsy. But with scattered sheets of ice, I really had no other option. I reached for solid hand holds to no avail and accepted working my way up slowly on the steep grade with the great foot holds. I was so thankful I had learned how to rock climb in the past couple years because without that experience, climbing without a rope would have been practically impossible. But even with that experience, I had to constantly remind myself to keep my hips out and over my feet rather than leaning into the wall.

Working across a ledge over to an easier side, I rushed to step and felt my center of gravity slip behind my feet. I lost my handholds and with that feeling of falling overwhelming me, reached forward with both hands and managed to get purchase. My heart rate spiked and I attempted to calmly remind myself, “take it easy Grayson, no rush, no rush,” before taking another step. After that my movements were fluid and methodical and meticulously planned. I scoped out every handhold and foothold before every movement and slowly worked my way up. The warmth of the sun was getting closer and I started having to calm myself down over the excitement and urge to rush to reach the top.

But inevitably the solid slab turned to a gnarly eroding near vertical face and I was once again stuck with even crappier options. Had this climbing been just 20 feet off the ground I wouldn’t have dared attempt it. And here I was, nearly 1500 feet off, contemplating my ability to climb it. But as I worked my way over to the left to scout out the climb over there, I saw a snowy couloir which began some 100 feet below me and continued up to the top. It was my way out and I couldn’t have been more excited.