Now back up, even further into the depths of space. At this location, the sun just looks like another star and no trace of planets, even the largest, is evident. Our sun shines no brighter, no more spectacularly, than any of the other 300 billion stars in the Milky Way galaxy. Now we’ve come to the point of vastness that the human brain is almost completely incapable of grasping. As a comparison, if you counted to 300 billion at one number per second (very fast counting), it would take you 9512 years and 342 days. That is an immense number, far to high for us to grasp.

I challenge you once again to abandon any preconceived notions about the universe. Separate yourself completely from it and imagine that you have never learned anything of religion before. Leave behind any hint of bitterness towards my words and read them with open eyes and an open mind. Now take yourself completely out of the universe. You are now a non-dimensional being who can travel wherever you want. You are observing the universe as a child does a snow globe. Remember how there are 300 billion stars in our galaxy? There are an estimated 300 billion galaxies in our universe. Our star is the tiniest fraction of a galaxy which is the tiniest fraction of the universe. To attempt to scale down this number once again, if our single galaxy of the 300 billion galaxies was a fraction of the distance from New York City to San Francisco, it would be six ten-thousandth’s of an inch. Our sun is an insignificant star in an insignificant galaxy. 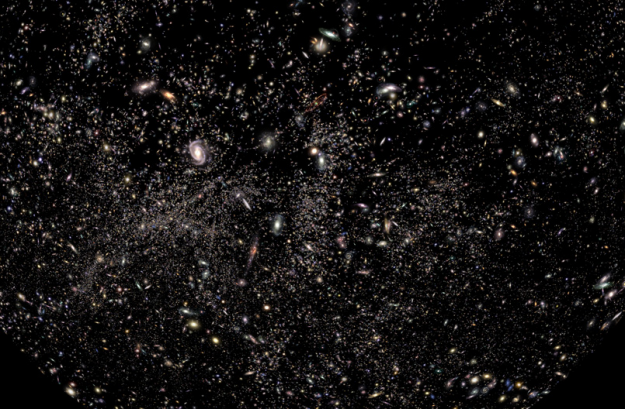 It is hard with these facts to see that our imagined self-importance still holds water. It is difficult to see that there is some heavenly father than hears our prayers when we recognize that the universe is so vastly large. I am not trying to cause distress. I imagine many people have developed a shield to immediately reject what I am saying. But for those who are willing to open their minds up to these ideas, they may be capable of seeing that this is not a bad thing. Not having some omnipotent being to protect us is not the end of the world.

I understand that these thoughts once had a purpose just like war once had a purpose. The reason we are the dominant species is because we were good at killing our competition. Once we as a species developed a consciousness, those who could comfort themselves with theology survived while those who were asking unanswerable questions died. The early humans who spent time pondering existence instead of pondering their next meal most likely starved. But those who simply made up an answer and moved on to hunting survived. Religion caught on. It was survival and religion helped it. But we have evolved past this. Just as we no longer need to fight for land or resources through war and murder, we in the first world have time to contemplate existence. As a result, we’ve learned a lot about ourselves but some people are still hanging on to primitive beliefs that got us through the harsh prehistoric times. But we can abandon this now and truly attempt to understand this place and what we are doing here. That common goal can unite us. The search for evidence and truth can bring humanity together instead of dogma driving us apart.

I do think humanity is broken right now. We are not adapting to the twenty-first century as well as we adapted in prehistoric times. I believe that acknowledgement of insignificance is the first step towards a united humanity. I want to ask you once again to read with an open mind and truly invest yourself in the emotion and amazement that I am going to attempt to convey. With coming every little bit closer to abandonment of my imagined self importance, my life has become much more meaningful.

Initially, triathlon and school seemed utterly useless and unimportant. My interest in formal education plummeted along with my placing in the triathlon results. Times in sport and grades in school attempting to depict months of hard work seemed utterly useless. Nothing had any purpose and I refused to apply purpose to something that was so evidently without one. It would have been much easier to return to the outlook that I was some divinely inspired being. But logic was too overwhelming and powerful and I had to cite the evidence. It made more sense, despite its bleak outlook.

With more and more studying of the smallest and the largest of earthly and celestial objects, I began to realize something. Importance is deceitful. People have done some awful things in this world because of their imagined self-importance. In sport, there is no better example than Lance Armstrong. He cheated and stepped on everyone to get to the top. His vision was narrow and could not see his insignificance and the insignificance of winning.

Cheating in sport seems small and it is but the fundamental basis of it, imagined self-importance, has led to many wars and many genocides over the time that man has been on this earth. We kill each other because of a delusional belief that we actually matter. We are willing to murder an entire population over land. I have witnessed men fly planes into buildings because of imagined self-importance. We preach the word of god telling others that they’ll go to hell. Our entire country is pitted against each other every four years instead of united together for a common goal.

It may seem impossible that we could simply be, that we could be as insignificant as ants on the ground. We like to imagine that we are more important than our neighbor. I understand, purposelessness is a difficult proposition and not one that anyone is likely to adopt easily. Without the abandonment of divine purpose, however, we are allowed to create purpose for ourselves. Personally, I have acknowledged a thirst for happiness and exploration and have adopted that as my purpose. I am biologically driven by exploration and happiness and I imagine, when granted unlimited resources and knowledge, others have similar interests. The universe is an amazing place and I want to further my understanding of it. Happiness that results from discovery may seem a basic and simple emotion, but that happiness gives my life worth.

Every single day I wonder how I could possibly unite the human race and the only thing I can conclude is that it will result at the abandonment of religion and other illogical thinking. This may sound harsh but I want to clarify that I am not necessarily talking about the abandonment of god. I simply want people to realize that the existence of god does not change our predicament here on this spaceship in this seemingly infinite pool. We, and other imaginable inhabited planets scattered around this cosmic immensity, are alone in this physical vastness. For all intents and purposes, there is no creator who will save us from ourselves. We need to do that. We need to help each other. I know a purely physical world is hard to grasp, but is it truly any harder to grasp than one with an immaterial god? Imagine a man with a white beard and you have failed. Imagine a force infiltrating everything and truly attempt to grasp it. If you can, kudos; you’re the only one. If you can’t, join the club.

I have several favorite videos that help with the understanding of these ideas that I may have poorly explained. Once again, they may turn away religious people but I hope that you can possibly watch with an open mind. Please forgive me if I have offended anyone. I am not trying to stir up hatred. I really am trying to help. I truly do believe that the end of war, the end of starvation, the end of genocide, the end of nationwide depression, and the end of almost every other conceivable limitation on humanity comes with the end of illogical thinking.

3 thoughts on “The end of illogical thinking”