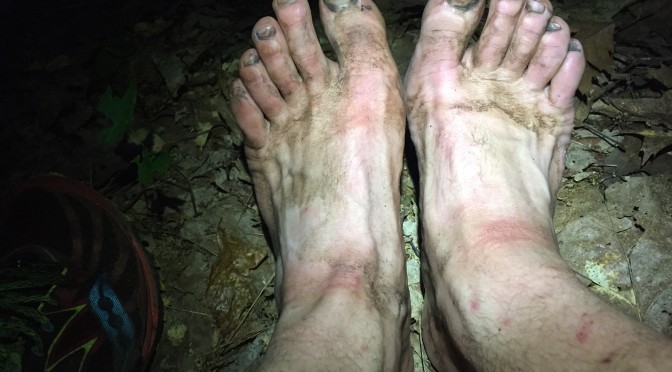 Later in the evening I needed to resupply in the town of Salisbury, Connecticut. A super nice older lady, Maria McCabe, hosts hikers at her place. I decided to send her a mail drop with intentions of staying the night in Salisbury but was hitting it too early in the day to stop. I called her about an hour outside of town to check and make sure my package had arrived alright. She put me on the line with another hiker who was staying with her saying she had hearing difficulties. I told the man that I was going for the unsupported record and I unfortunately wouldn’t be able to stay the night but asked if it would be okay if I reimbursed Maria for holding my package. He said that’d probably be fine, clarified that my package was there and I expressed my gratitude and said I’d be there in an hour.

Before heading to Maria’s place, I swung by the grocery store to grab some extra sweets, including a pint of Ben & Jerry’s, a family size bag of UTZ barbeque potato chips, and a chocolate milk. Then I worked my way through the beautiful rural Connecticut town to her house. It was a beautiful place and I was waved in from a person sitting in her kitchen. I walked over and introduced myself. Maria gave me my mail drop and offered me a seat at her table to pack up my things and talk.

The man with whom I had talked on the phone was sitting at the table with another lady and Maria. The older man, in his early 60s with unkempt gray hair and scraggly beard, was the kind of hiker who always wears gaiters, a wide brimmed hat, and carries a solar charger. He suggested that I go outside to pack up because I’d probably have more room. I was kind of bummed because I wanted to talk while I packed up my stuff, learn their stories and have a real conversation for the first time all day. But he was right, it’d be easier outside so I didn’t think much of it.

Once I had exchanged all my wrappers for new food, trimmed my nails, and let my phone charge for a bit, I returned inside to thank Maria. She wasn’t in the kitchen so I asked the man where I could find her. He directed me to where the TV was blasting from. I walked in, thanked her so much for her help and hospitality and offered her some cash in exchange for holding my package since I would be unable to stay the night. She declined with the kindness of a sincere friend and wished me the best of luck on my hike. I thanked her again and told her if I came back through I’d make a point to come enjoy her hospitality and her beautiful town for longer.

Interacting with a crazy man

When I walked back into the kitchen, I wanted to ask the man about his trip. I asked, “What’s your trail name?”

Without looking up from his crossword puzzle, he muttered, “Go on hiker” and waved me off. I should have taken the hint that he didn’t want to talk but I was naive enough to think he was sincerely worried about slowing me down. So I asked him if he was a thru-hiker.

“Sort of. Not really,” he mumbled hastily.

Out on the trail people get bummed for a lot of reasons and as a community, it’s our responsibility to help each other. Down in Virginia before I started, I met a guy sitting in the middle of the trail looking completely despondent. I sat down, asked him about his trip and after a few short responses, I asked, “Is everything alright?” I hoped he would open up, figuring there was maybe something I could do to help. He told me how he was having a tough time, how he had fallen hard earlier, hurt his leg, and dropped his water filter without knowing it. So he had no way to treat water in the thick of Virginia summer and was busted up and frustrated. But after talking for a bit we learned we shared the same birthday which was just a couple days earlier, and by the end we were both having a good conversation and laughing.

I’ve certainly had moments on my trips where I just wished someone would talk to me and let me vent. This guy seemed to have something to say, so I asked him, “What do you mean? Are you a section hiker?”

He looked up from his crossword briefly and with the flick of his hand said, “Don’t worry about it hiker, scram.”

I briefly had to check myself and make sure I hadn’t stepped back in time to where the word ‘scram’ was an actual part of the English vocabulary. But once I was set back in 2015, I made a horrible mistake of not leaving right then. “What’s going on man?” I asked with a more pressing and frustrated tone.

He looked up, albeit briefly, because he was obviously having a tough time maintaining eye contact. “I’m against everything that you stand for,” he told me before looking back down.

For a second I thought, man does this guy not like short people? No that can’t be what he is against. Then I thought, does he know I’m against the senseless killing of puppies? I stand for that. Is he a puppy killer? Wearing short shorts? Is that it? Red shirts! Eating food! Hydrating! I was realizing I stood for a lot of things. I mean not like I was going to go out and rally for red shirts, but I do like them. This guy’s a red shirt hater.

All kidding aside, I knew exactly what he was talking about and holy tomatoes. This guy is this upset because he doesn’t like the speed at which I am hiking the Appalachian Trail. This was the first time I had directly interacted with this sort of intolerance, so it took me a second to compose myself. I wondered if he knew I had already hiked the trail slowly (very slowly). Did he know there was more to me than just walking fast? What did he even know about me. He knew my name, and he knew that I wanted to break the record. And from this tiny bit of information, he had concluded that we were destined to be mortal enemies, all because I had made the decision to walk very slightly faster than him and for more hours each day. That’s it.

“Are you kidding me?” I responded, my heart rate rising with the rage of realization that a person as intolerant as him actually exists.

People on opposite sides of political spectrums have civil discourse. Members of drastically different religions can discuss their beliefs with civility. But the speed at which I chose to walk a trail is cause for the silent treatment. Seems rational.

“You don’t even know me,” I said with a small laugh. It was funny, I couldn’t deny it, and more than anger, I felt the situation was extraordinarily comical. And with genuine sincerity I looked at him and said “I think you’d find if you got to know me that I’m a rather nice person.”

He kept his head down, I’m sure making a lot of progress on that crossword puzzle. And with frustration and disappointment, opening the door, I turned back, looked at him and said “Grow up man.”

There’s an extremely disorienting realization when growing up when you realize quite literally no one has any clue what their doing. You think about all the people you trusted, the people who scheduled your appointments, the people who took care of you, who taught you, hell even the people you raised you were for the most part just faking it. You see adults with no idea how to handle emotions or awkward situations, who can’t manage money or even take care of themselves in the most basic ways. In this moment, with a mixed feeling of pride and disappointment, I understood that I was leaps and bounds ahead of this guy in understanding what is important in life, and more than anything, it made me sad.

Hiking out of Salisbury, Connecticut

On the hike out of town, I immediately called my parents to update them. I had to tell someone. This was the story of such monumental douchery that one person alone cannot be entrusted to bear it. It needs to be known to the world. For the next couple miles, I hiked south on the Appalachian Trail, eating out of an 8oz bag of potato chips, recounting the tale of number one hiker douche, trying to laugh off the farce I had just witnessed in town. There were very few times I laughed on the grueling adventure and after some time to reflect I think I mark those moments as some of the absolute highlights of my trip.

With a fully belly and a wide grin, I didn’t make it too much further out of town. I made it to the rock outcropping known as Giant’s thumb and set up my tarp. I considered for a moment that I might lazily pitch my tarp or maybe even not at all. The skies were clear and I craved the ease of not having to bother with it. But I knew how the weather had been, and anticipated how it would continue being, and decided to pitch a taut tarp. And damn good thing, because an interesting night was about to get even crazier.