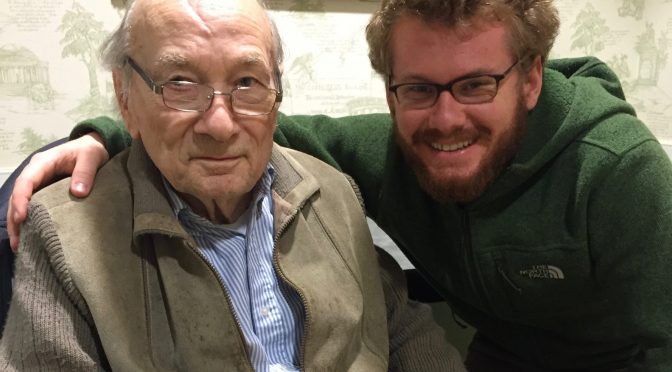 A few days ago, as I sat watching my granddad take some of his last breaths, I couldn’t help but want to fight and resist the reality that was quickly transpiring. He had developed pneumonia over the last few days and it was progressing quickly. As he reached for each breath with every muscle in his body, I thought of all the medical measures they could do to save him. But he wouldn’t want to be saved at all costs and despite my desire to have him around for eternity, I respected that. But it was so hard for me, as someone who has been learning about all the ways to interfere in the process to just sit back and accept what was happening.

He died the next morning as I sat at home studying. And since then I haven’t stopped thinking about what his life was and what could’ve been. But each time I come to the idea of the future, I realize everything is better now. My granddad developed vascular dementia shortly after my grandmother died nearly 9 years ago. He was wheelchair bound and a couple weeks ago when I visited him he had no idea who I was. There were lucid moments, but they were becoming more sparse.

For years that was who he was to me. He was the guy who couldn’t get out of bed, the belligerent old man who still ranted about how he unjustly had his license taken away. He was the guy who I had to remind him who I was nearly every time I saw him. His vocal cords became weak and I couldn’t understand much of what he said and his stories were becoming less and less based in reality.

But now that he’s gone, the man I grew up knowing is taking back its hold. I remembered how jacked he was. His biceps were wider than my thighs. I remembered that just over 10 years ago he was out in his huge wooded yard clearing debris after a hurricane. I remember spending the day with him out at his and my grandmother’s house when I was home sick from school and riding in his RV to go fill up the gas. I remember he wore a glove to touch the pump. I now use hand sanitizer after every time I pump gas and realize now that germaphobia might be a heritable trait. I remember his notes that he would write in birthday cards and the compliments he would give that would make me feel like I was the singular most important thing in the world to him. I’ve saved all of them. I remember his stories from his days working as a Henrico County police Captain. They were the kind of stories that humbled me and reminded a kid that there was this whole world before I was even born.

The end of life is often rife with diapers and wheelchairs and humiliating dependence. When I lived in Richmond, because of some cerebellar strokes which made his coordination a little lackluster, I became his chauffeur. But he was still mostly with it and politely gave his snotty youngest grandson directions through back roads around Richmond to get him to his doctor’s appointments. But he thanked me genuinely every time and I never saw him get stubborn against my assistance. He faded with his unfailing class, despite the drawn out path. And in the end, he got to go on his own terms and he was ready. I’ll miss him more than he could ever have known but when I stop to put aside my selfish desire to have him around for another twenty years, I remember that’s there’s another generation coming into the family and he would be thrilled to make room. The next generation will grow up hearing stories about their great grandparents just as I did, and I’m so thankful for the 26 years of stories with my granddad to tell them.

4 thoughts on “My granddad, Donald Cobb”