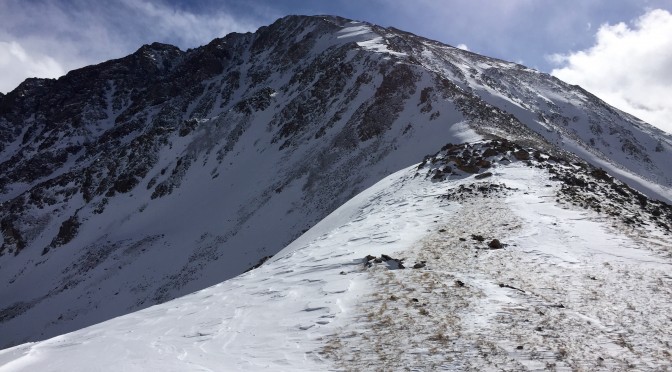 Nestled between Mt. Huron, one of the lowest 14ers at 14,003 feet and Mt. Elbert, the behemoth of the Rocky Mountains at 14,439 feet, La Plata sits as the fifth highest Colorado mountain at 14,336 feet. It is known as a more difficult climb of the 58 Colorado 14ers with some exposure, steep climbing, and some class 2 scrambling involving using your hands to ascend the slopes.

For all the research I had done on La Plata before we hit the trail, I couldn’t totally understand why there were two different routes for summer and winter until we were out there. The winter route climbs the ridge early to stay away from the avalanche danger plaguing the western slopes. And when I saw what that climb entailed I fully understood why the tamer route up the western side would be more appealing. The ridge kicks up abruptly with a wall of loose rock and steep scrambling. The little chute up the mountain looks absurd from a distance but when we got on the slopes we found it much more manageable than expected. The stones were mostly frozen in place and the grade was shallow enough that anything but a tumbling fall would be a gentle slide down the snowy scree field. We climbed close to each other so that any rock I kicked off wouldn’t have time to gain momentum before slamming into Bo beneath me.

When we gained the ridge we were amazed at the overpowering mountains surrounding us. Elbert was easily visible to the north, it’s sharp summit standing out amongst the lower peaks. A few days ago I stood on top of that mountain and was thankful we weren’t dealing with the 60+mph winds I dealt with on that summit. 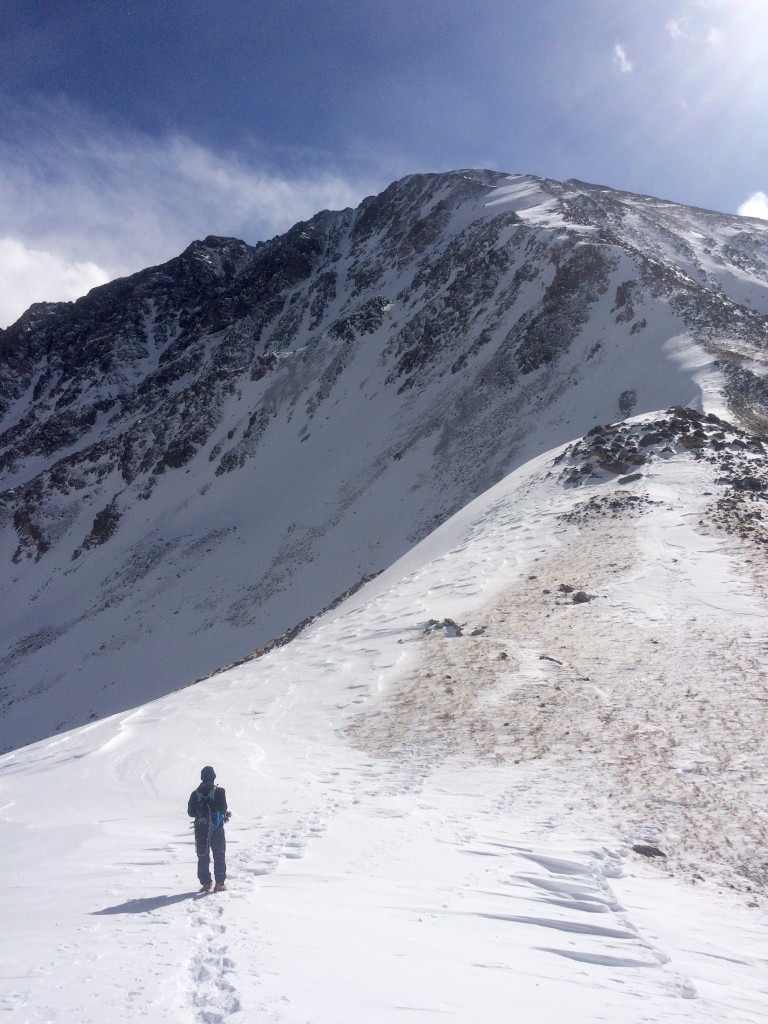 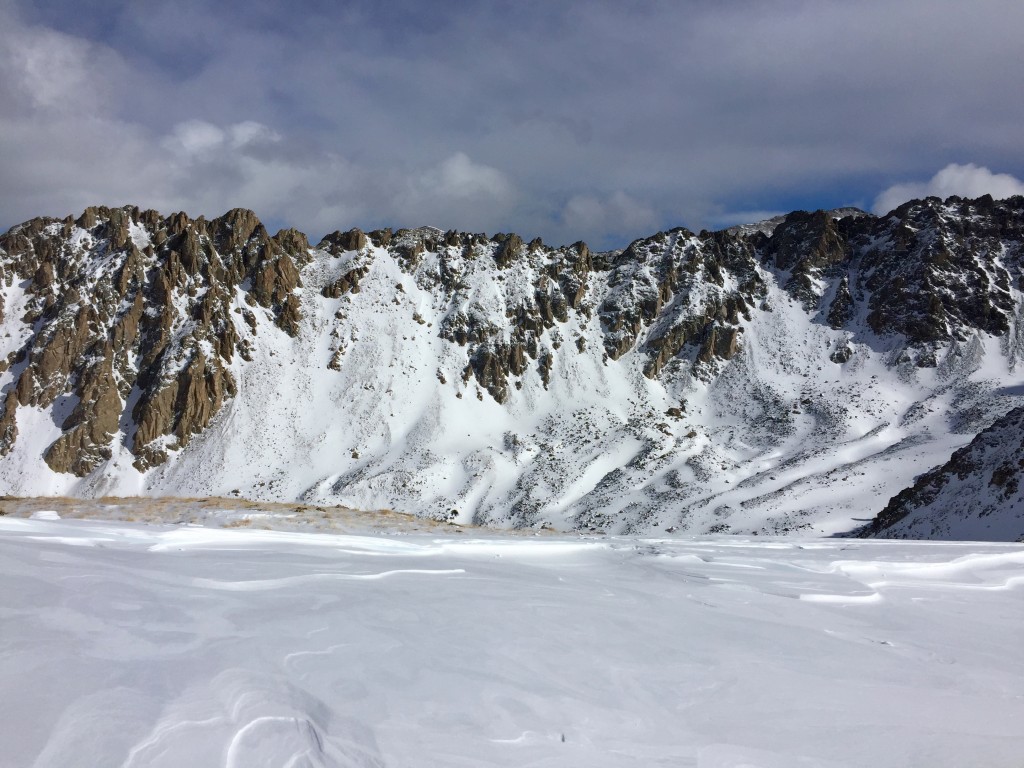 The hiking was easy for the next mile or so, traversing along the ridge with ease on the windswept rock. We kept our jackets off and dried off in the late morning sun and cooling gentle breeze. But by the time we reconnected with where the summer trail gains the ridge along the western slopes, the wind was picking up and the sun hiding for longer periods behind the ominous gray clouds overhead.

I told Bo that probably 90% of hikers would turn around at this point. We knew the forecast, but even if we didn’t the sight of a summit hidden from view can be enough to send a hiker back to lower elevations. We were in for a wild ride and we knew it. Fortunately the ascent of La Plata is extremely straightforward. It’s one of those peaks that if you’re not climbing, then you’re going the wrong way. So aim straight, go up, and we felt safe that we were headed toward the summit.

Eventually the ground disappeared beneath snow and only the caps of the largest stones and boulders made their presence known. We hopped along the tops for a while before attempting ascending the crusty snowfield on the leeward side of the mountain. But five steps in the thin layer of ice on top cracked through to the powder and we were postholing above our knees. We whipped out the snowshoes and popped the televators on the heels which are little bars that snap up to make the climbing more like stairs than a steep slope. From then on the ascending was fast and we rolled up the ridge. 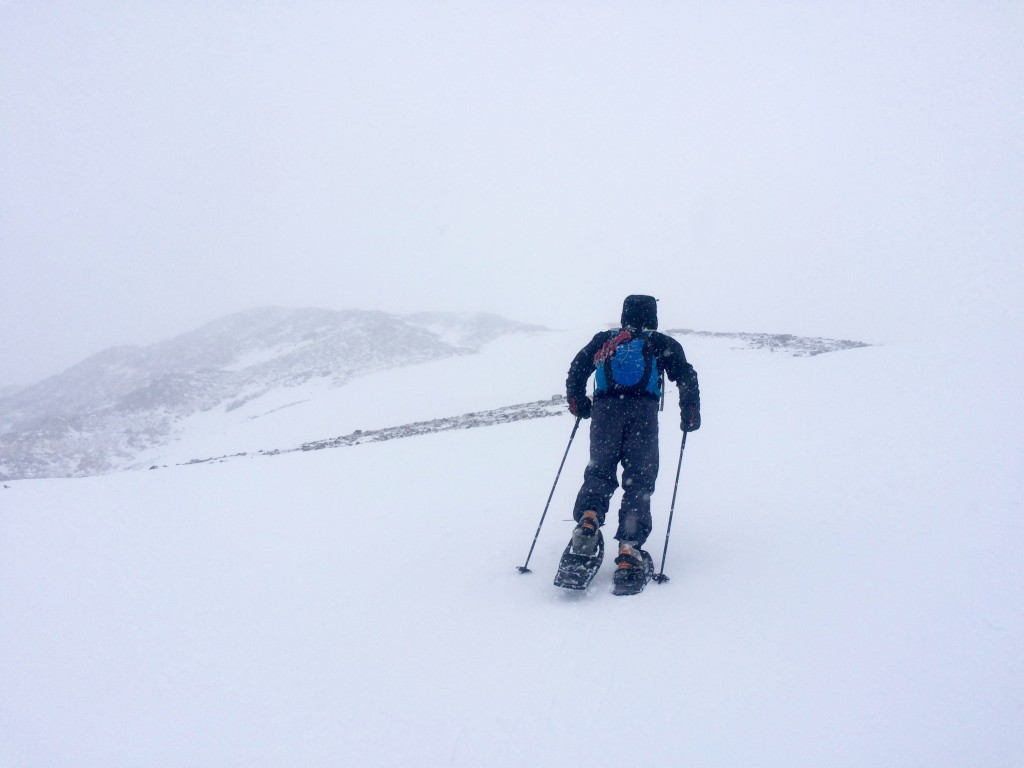 By the final pitch up to the summit the snow was coming down thick and fast and the wind was ensuring it found its way into every crack in our outer layers. Without goggles, Bo’s eyelashes and cheeks were coated in a crystal layer of ice and he had to work to keep his eyelashes from freezing together. Having gotten some simple frostbite on my nose earlier in the week on Pikes Peak in some -15 degree windchills, I was quick to cover up and only had my lips exposed from a small breathing hole in my balaclava. I had lathered lip balm on them down at the car as some protection from the wind so they felt fine despite the blasting cold.

With exposed rock for the final stretch to the summit we took off our snowshoes and left them down the mountain and rock hopped our way to the top. I was bundled up under my shell with a thin fleece but was still struggling to stay warm. I made it to the summit just before Bo and when he made it up we enjoyed a good but brief celebration before heading back down in the white out conditions. 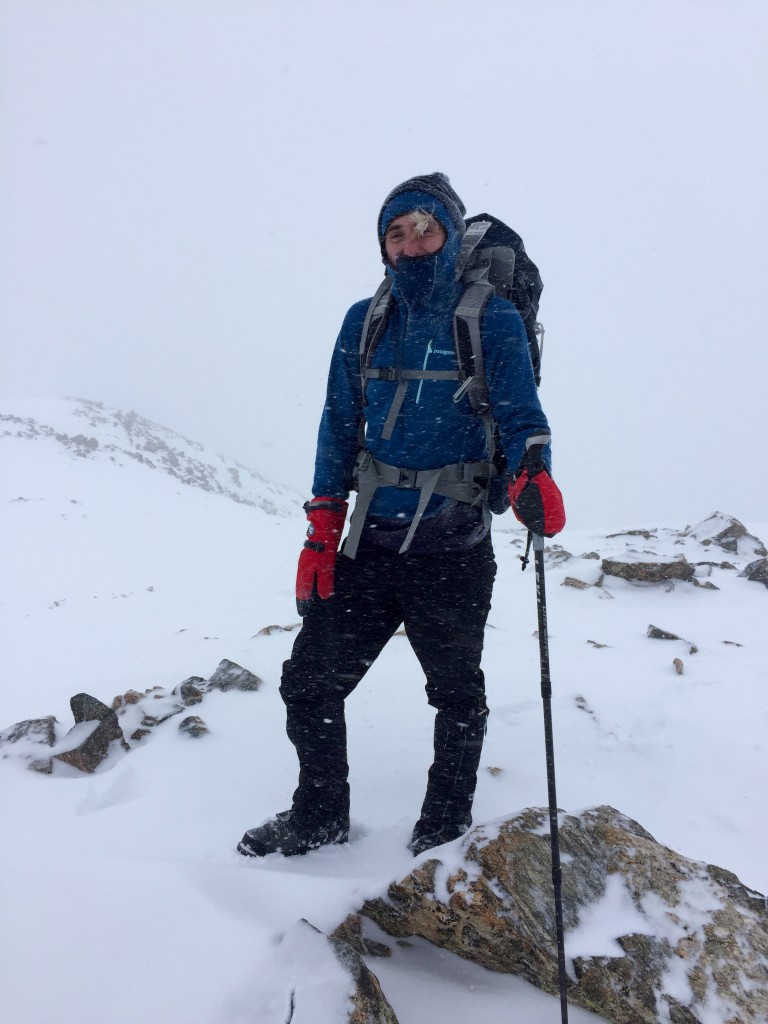 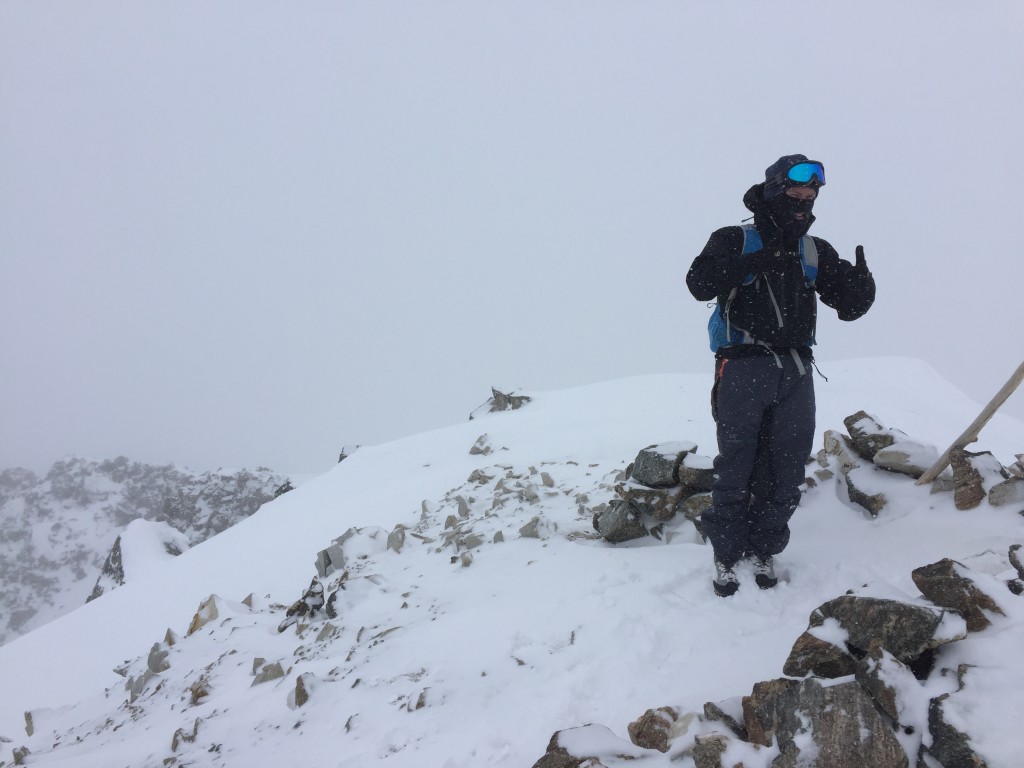 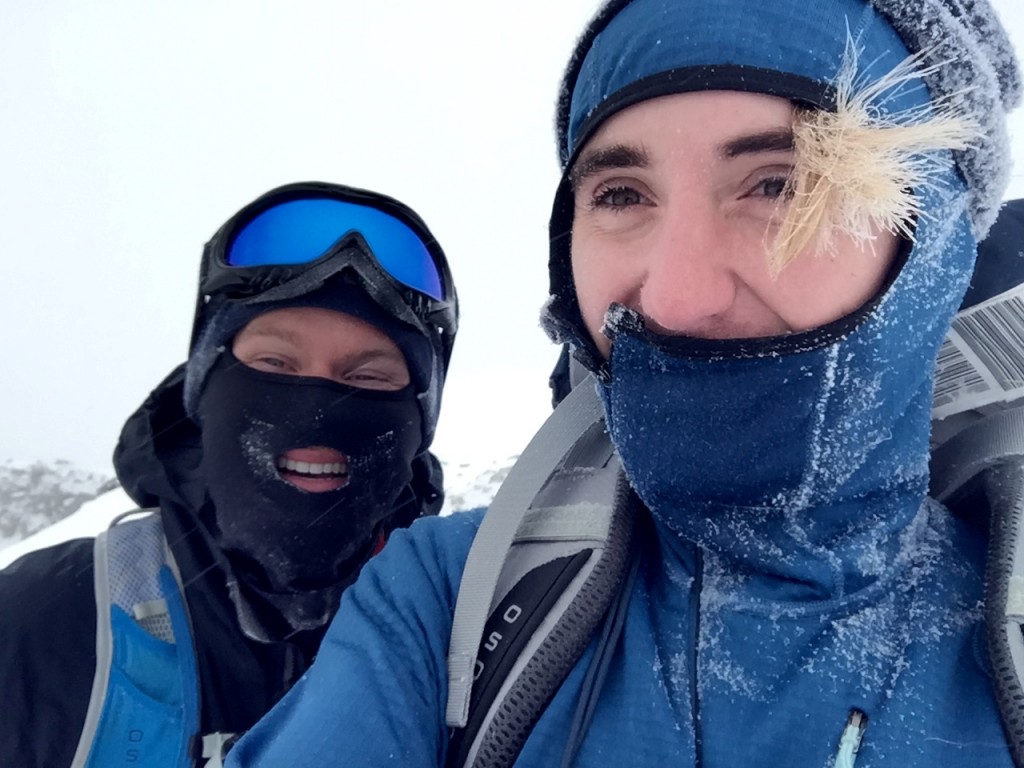 I was committed to glissading down the tamest slopes, the ones that didn’t have a lip off into infinity on the eastern side of the mountain. But without an ice axe, keeping slow was hard going and I shoved my trekking poles into the icy snow with all my strength to keep at a controlled slide. I kept one snowshoe facing forward, front points scraping the snow as a sort of brake pedal. This system worked well for me but with only one trekking pole, Bo struggled even more to maintain a comfortable speed. Behind me he slipped and slid toward the edge, shoving down at the snow, reaching for some grip on the slick slope. Totally oblivious to this going on up the mountain, I stood there waiting and saw Bo appear out of the haze, side stepping down the snowfield rather than glissading, shaken up after his uncontrolled slide. I had a similar experience the day before when descending from Mt. Yale, getting caught in a small slide toward a 15 foot drop I flailed and reached for the small stones peeking out from the snow. Thankfully we both had managed to stop ourselves but we’re now fully committed to bringing ice axes on our futures climbs, no matter what the grade and conditions. 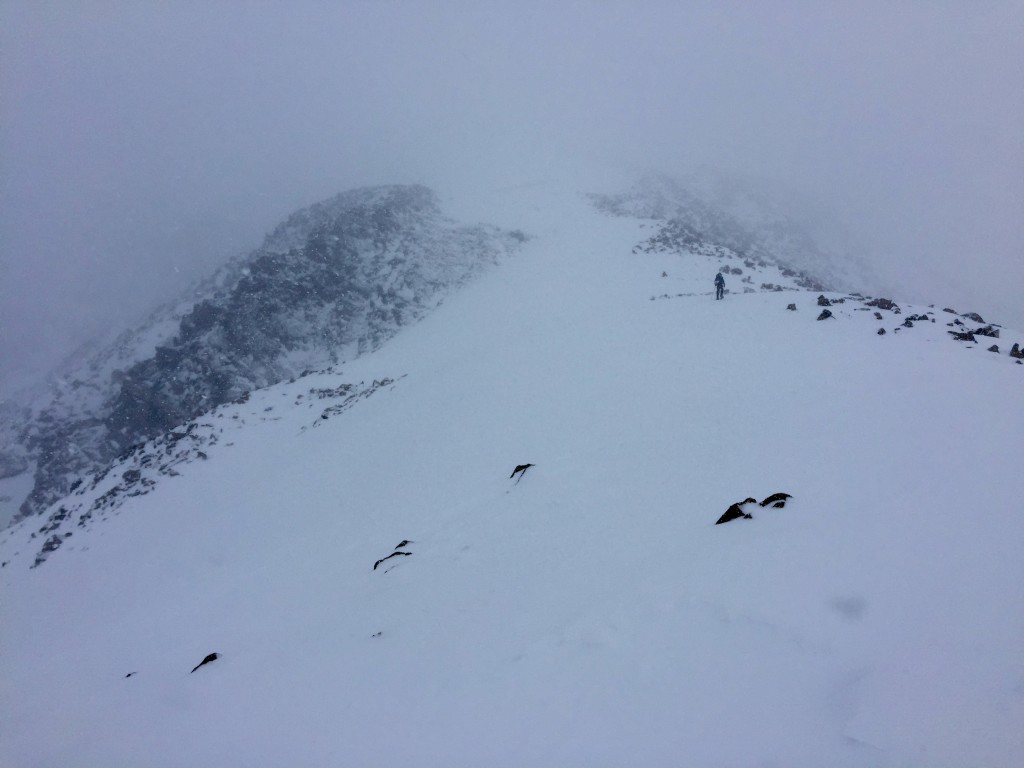 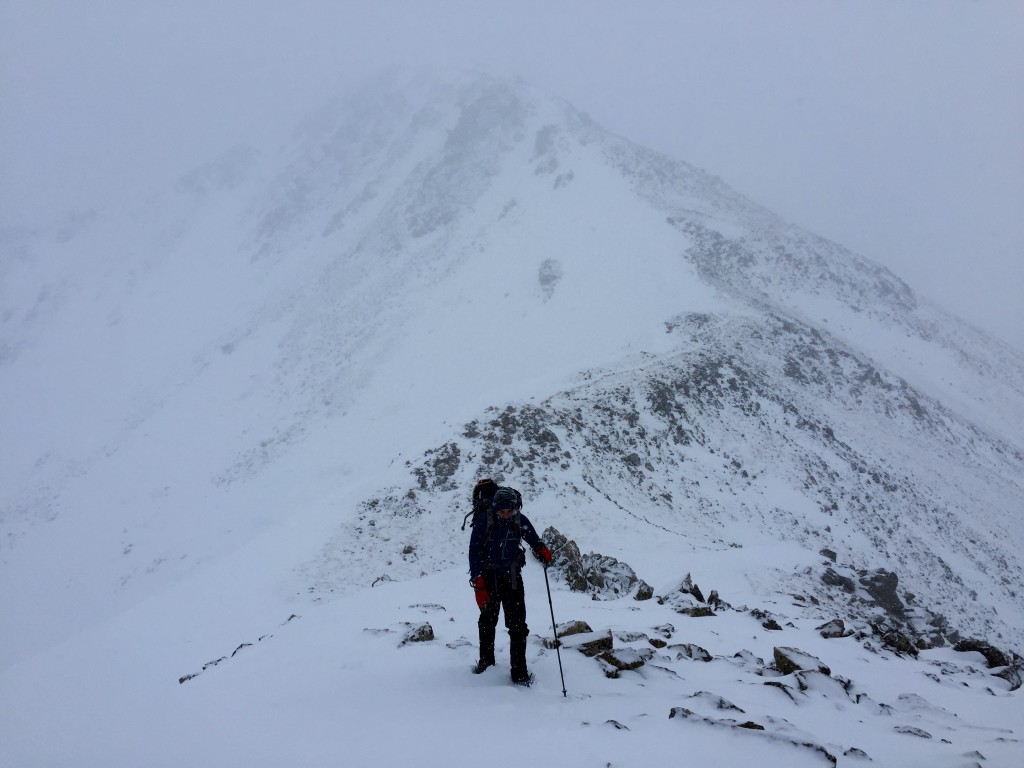 Toward the end of the long snow field on the upper ridge, I turned around to catch a glimpse of Bo hiking just behind me and looked up to see the summit appear in between the clouds. We had a beautiful view of it on the way up but to see it come out after descending it really drove home the awesome power of the peak. It was a beast of a mountain, and the seeing the steepness from a distance gave some perspective of what we had just done. The clouds parted for good and the summit remained visible for the rest of the climb down to tree line. Bo joked that the mountain was conspiring against us, that the minute we were up there it blasted us, and the minute we were down it cleared up. Since we had comfortably made it off the high ridge we could laugh about it. 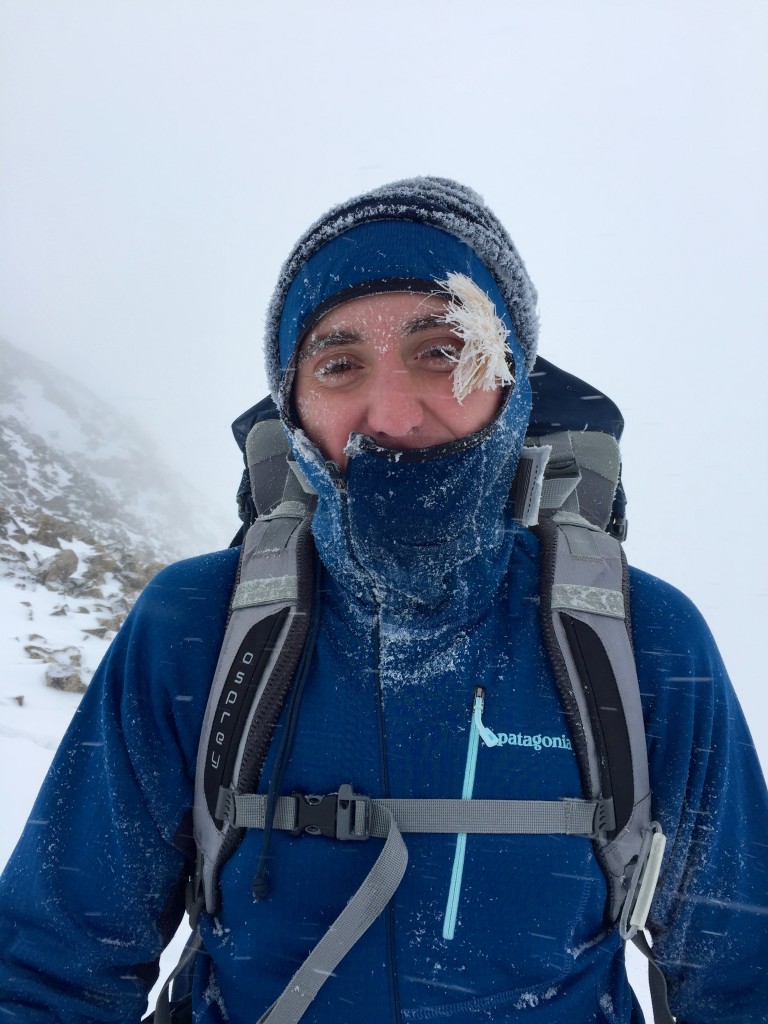 But we still had the hairy descent that we had come up to gain the ridge. We pinpointed where we had come up through the rocks. I slid down on my butt half the way but we made it back down to the trail. With the sun setting we were happy to be back on a packed trail, albeit if slightly concealed from the dusting of snow. Once darkness really came we enjoyed hiking by the haze of the full moon behind the clouds and kept our headlamps off all the way back to our cars.

Another epic day with Bo, and we knocked off the third 14er for him and number eighteen for me. I sort of set my goal at twenty 14ers for this trip but I want and need a break from the high mountains for a bit. I’m working my way over to Black Canyon of the Gunnison for now and maybe even on to the Grand Canyon for a rim to rim to rim challenge.