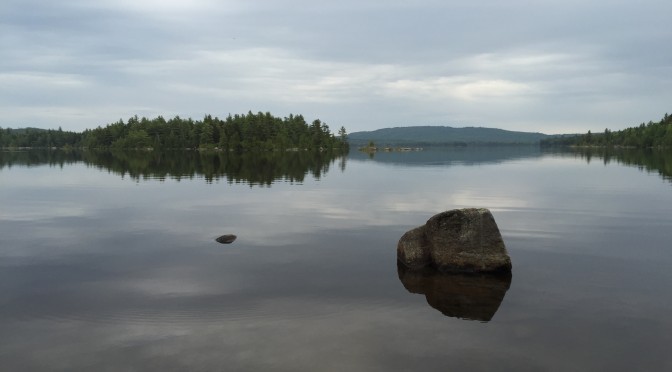 Today I had to make the tough decision of whether to resupply in Monson or try to make it another 35 miles to Caratunk to pick up my mail drop where I originally planned to resupply. I was running low on food but Monson was a 2 mile walk into town which would add 4 miles to my day while Caratunk was only .9 miles off the trail. It may seem like a minor difference but adding 4 miles onto my day would be a pretty big impact this early on.

I was up early and decided I wouldn’t decide until I reassessed my food situation at the trail that led into Monson. Early in the morning I startled a young moose which bolted off on the trail ahead of me. Fortunately they’re usually the most skittish animals in the woods because otherwise they’d end up being quite the obstacle.

When I made it to the trail at Monson I felt so relieved at the prospect of not having to ration my food that I decided to run in. I would make it quick, sort out exactly what I needed to do and what order I was going to do it in so I could limit the amount of time it set me back. I thought, I should get my phone plugged in first, get a shower, get a meal, and while the meal was being cooked go shop for resupply. I would buy enough food to allow me to skip my resupply at Caratunk so at least this would only add 2 miles to my original plan.

I dropped my pack outside Shaw’s Hostel in Monson and went in to meet the new owners, Hippie Chick and Poet. Hippie Chick was the daughter of the owner of the AT Lodge in Millinocket, Ole Man, where I had enjoyed staying just a few days earlier. Six years ago I stayed two nights here and it was an absolutely wonderful experience. They fed me tons of food and were so nice it was like a home away from home. This time I unfortunately couldn’t stick around, but still was there long enough to enjoy the new owner’s hospitality.

When I went in to meet them they offered me a drink and fresh fruit before I told them I was trying to break the record and would love a shower and a place to charge my phone. They told me they had heard about me and immediately became the most awesome NASCAR pit crew I’ve ever seen. They knew my hurry and were so accommodating. They had me a clean towel and showed me the bathroom and I was in the shower in minutes. My phone was plugged in and it was time to scrub the 4 days of dried Maine mud from legs.

Out of the shower I walked down the road to a small restaurant and ordered a huge breakfast. While that was cooking I ran down the road to a convenience store and bought them out of sour patch kids and skittles. I returned and ate two pancakes, two eggs, a plateful of hashbrowns, and a delicious milkshake before returning to Shaw’s to finish resupplying in their new shop. Having decided rationing food was too much of a strain on my body, I let my pack carry a little more weight. My 10 liter pack was bulging with the bars and candy but I was ready to hike out. I thanked Poet at Shaw’s for being so helpful and made my back to the trail. On the way out, with a full phone battery, I called my mom to check-in and let her know I was alright.

Back on the trail I realized I had forgotten to pick up some much needed anti-inflammatories but a SOBO hiker staying at Bald Mountain Pond Lean-to was nice enough to donate a few of his ibuprofen. I took a short break there because the view was outstanding. He was setting up his hammock on waterfront property and I couldn’t help be momentarily jealous of his luxury.

But after the two of us checked out a fleeing porcupine (the first I had ever seen) racing up a tree, I got back to hiking. I knew what was ahead of me because I remembered it from 2009. Moxie Bald Mountain wasn’t an outstanding climb, but the top was just granite. A beautiful summit but with impending rain, I wasn’t so sure about how much fun descending the slick rock on the south side would be.

What I couldn’t have known was that the blowdowns from up in the 100 mile wilderness were to show their ugly face again on the ascent and descent of Moxie Bald Mountain. On the way up I was struggling through the dense fallen evergreen trees. Once I made it up onto the slick granite, the rain began in earnest and I started feeling the wind tearing at the summit. I couldn’t wear my poncho again for fear of it tearing while climbing through the sharp branches of the blowdowns. Up on the slick granite I was having trouble keeping upright in the wind but managed to traverse the summit quickly and get back down to the shelter of the trees where I once again got to climb through, over, and around more fallen trees. I was able to wear my nylon wind jacket which kept me warm enough to suppress the shivering but I still couldn’t wait till I passed the sharp branches to put on my poncho and warm up.

Once out of the evergreens I figured it was safe to don my rain gear and warmed up quickly. By this time it was dark and the mud was getting deeper in the driving rain. The trail turned into a creek but by 9:30pm I made it to Bald Mountain Brook Lean-to. There was another hiker sound asleep despite the pouring rain pounding on the tin roof. I quickly hung up my food, blew up my sleeping pad, and slipped into my quilt and stretched for a few minutes inside the warmth of my Enlightened Equipment quilt. I was asleep quickly but the rain throughout the night made me wish I had brought ear buds. I’ve always feared having my food snatched in the middle of the night by a quiet and swift animal and avoided ear buds because of that. But the sacrifice of keeping my ears open meant I would certainly lose out on some sleep.

I knew it was going to be a short night. I had to make it to the canoe ferry across the Kennebec River the next morning or risk being put a day behind less than a week in. I set my alarm for 4am and accepted the mere 6 hours of sleep, knowing that I could easily take a nap on the south side of the Kennebec once I was safely across the next morning. It ended up being 32.4 trail miles with 36.4 miles total walking counting the resupply.