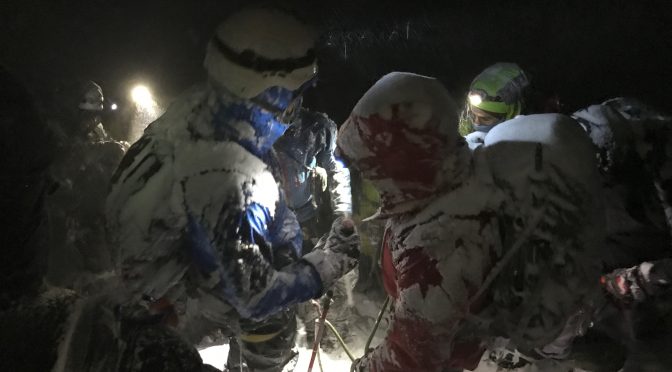 But in classic high altitude diuretic fashion, I had to rise to pee about 10 times in the middle of the night. Compared to the night prior when the refugio was full, now we only had about 10 people for the nearly 40 bed bunkhouse. When the other climbers got up at 9pm to pack and have breakfast and get started I got up to go pee. An Australian climber who would attempt the summit the day after me woke up too and stumbled down in his boxers. As he walked by me he mumbled, “Good morning,” and then kept on walking. Oh the joys of an oxygen starved brain.

The next day was spent packing up, chatting with my guide about what to expect, and mainly trying to stay comfortable, eat something, and rest up. I met my guide for the first time and was pleased he spoke more English than I did Spanish. I asked him how many times he had climbed Chimbo and he hesitated, stopped to count, before raising two fingers and belting with confidence, “Twice!”

If I wasn’t about to crap myself already this sent me over the edge. But as he saw the gringos face turn sour he started laughing and let me know he was joking. “I don’t know. At least 200 times,” he said more seriously.

Raul and I went through my gear choices and as I he saw not only what gear I had chosen but also the limited gear I had chosen to bring, I realized I had a fellow weight nut as my guide. He loved my small pack and showed me his pack, albeit with much more stuff since he was the guide. He knew nothing about me but if there’s anything that I’ve ever become mildly well known for, besides kayaking a stupid distance across open ocean, I’m the guy who carried a 3.5lb pack on a thru-hike attempt of the Appalachian Trail.

Raul and I hit the hay early again but I knew I wasn’t going to sleep. I laid down around 5pm to at least attempt to get some amount of rest but just tossed and turned until around 8 when I finally fell asleep. An hour later my alarm went off and I started the process to get ready for the summit attempt. This night the refugio was nearly full with 20+ climbers and guides making a summit attempt that night.

I had a bowl of granola with yogurt and despite my prior low appetite, I wolfed it down. I had a coke for the caffeine but I was so amped it wasn’t really necessary.

Raul and I stepped out of the refugio to relatively warm temperatures at around just below freezing. I had stepped out of the door before breakfast to check and decided to climb with just a t-shirt and shell. We started the ascent at an absolute snail’s pace. I was itching to speed up but respected the guide and understood what he was doing. I knew I could safely and comfortably climb way faster and had shown that with practically jogging up some of the 14ers in Colorado two winters ago. But Chimbo was different and I was new here. Raul knew what he was doing. We checked in with me every now and then between clanks of our trekking poles on the rocks.

“How are you doing, sir?” he asked. I comfortably responded and felt awkward that our only communication was basically him feeling out if I was going to die (metaphorically, ideally) on the climb of not. But I felt good and we hiked on without breaks, and slowly lifted the pace. Once we hit snow we could see three lights not moving on the lateral moraine above us. We reached them and Raul exchanged a few words with their guide as we slowly hiked by. 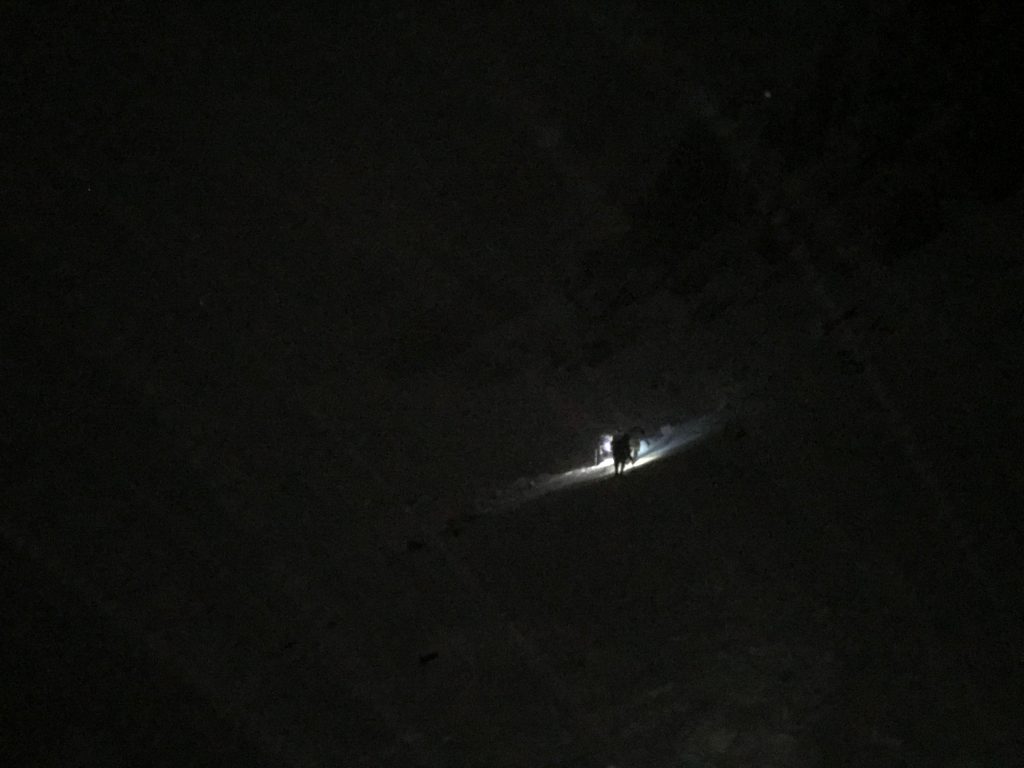 They started climbing behind us as we ascended, likely enjoying saving some energy from the steps that Raul was kicking ahead of all of us. Now Raul and I were the first ones but the team had turned from two to five. The other three didn’t have trekking poles and were visibly struggling up the gradually steepening slope. And eventually their group fractured into the one who could hang with us and the other two just 20 yards back but a seeming eternity by climbing standards.

Mountaineering isn’t an exciting sport. If you like sitting on beaches and reading books, you’re basically halfway to being a mountaineer. It’s a lot of waiting, followed distantly by way less slow walking, followed way way distantly by some amount of danger and potential sheer terror. It is almost all extremely uncomfortable, and some of it heart poundingly taxing. If you hate yourself then mountaineering would be right up your alley.

So the one guy was still with us. But I had acquired some truly volcanic travelers diarrhea over the prior week and so as we hiked I constantly was reducing his  inhaled oxygen levels even further, muttering “Lo siento,” knowing that with the language barrier I could never express how horrible I felt about what I was doing. I just hoped that my Gore-Tex pants weren’t quite breathable enough to release the beasts. “Lo siento. Lo siento,” I muttered apologetically as we climbed, Raul occasionally turning around to ask what I said. Don’t worry Raul, don’t worry.

The gentle snow fall that we had begun the climb with was looking more like a winter wonderland as we made it higher. The steps from the climbers the day before were gone and I was getting a little chilly in my t-shirt. Once wind chills were well below 0 degrees Fahrenheit I finally decided to let Raul know I needed a change of wardrobe. He told me to wait another few minutes and we climbed up a little further and out of imminent danger beneath a cliff face waiting to shed golfball to sofa size boulder our way. I kicked a seat into the snow to place my pack while I added a fleece underneath my rain jacket. I also switched out my thin glove liners for full blown Everest worthy mittens because if there’s anything that’ll ruin your day, it’s cold hands and feet, and frostbite but that’s another whole thing.

The other two climbers caught back up to us and the three of them passed while I added layers. Pretty sure when all of them saw I was just wearing a t-shirt no language barrier could prevent them from understanding why that break was essential. We kept climbing and eventually leap frogged them again, taking a wide turn to gain the top of a cliff band. At this point the climbing was about the steepest I had ever done on snow unroped and Raul told me we should put crampons on. Internally I was freaking out putting crampons on while practically dug into a wall of snow. I had shoved my trekking poles into the snow and thought about one of them falling forward and imagined myself lunging for it and sliding down over the edge of the cliff. As I felt my intestines rise into my throat, I leaned back further into the snow and laid my poles down beside me. There, there.

With traction we took solid and deliberate steps and ascended quickly. But the snow was thickening and the wind was getting very uncomfortable. The other three climbers were visibly in distress and Raul was seeming uneasy. However, out in Colorado, I didn’t let much keep me from at least making an attempt on a summit. If there was no avalanche risk and the sun was shining, I’d climb into -50 windchills with every bit of skin covered, knowing frostbite would ensue in seconds if any bit came unclothed. It was fun and made some mountains that in the summer would be cake walks a little more exciting. And if I waited for a perfect day to summit during a Colorado winter I wouldn’t have ever topped out.

But Raul eventually turned around and told me what he was thinking. “We’ll keep climbing but if this keeps up or gets worse we’ll need to descend.” Crap. 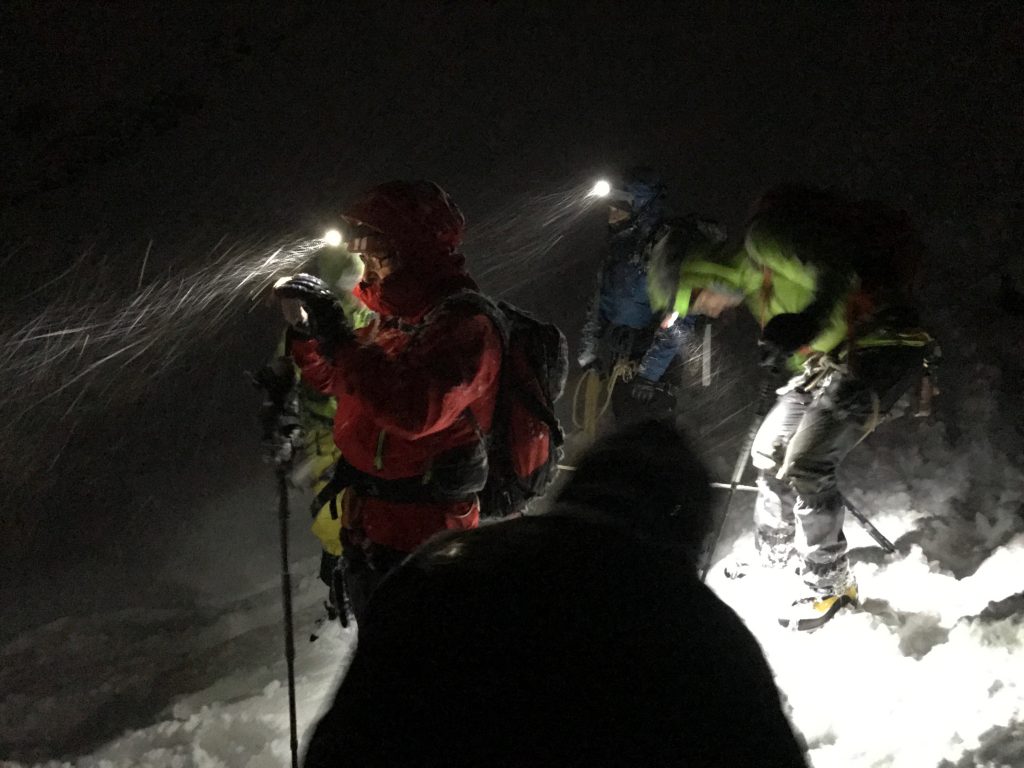 One thought on “Chimborazo Part 2: The climb”