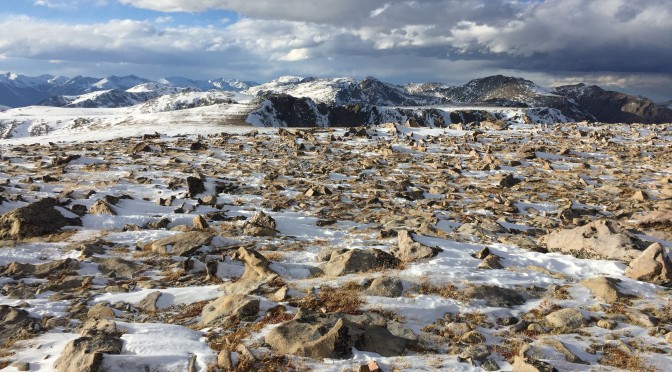 With temperatures dropping I put together a list of my absolute favorite winter backpacking gear that I’ve found over the years. Snowfall, high winds, and cold temperatures means gear has to be durable, warm, versatile, and of course as light as possible. The harsh conditions put tremendous strain on gear and the varying conditions often require very specific tools. I attempted to address several pieces of the various winter backpacking gear in this post. I’ve divided the list into super cold and mild cold (Heavy and Light) alternatives. These are relative definitions, but for a guy who took a 50 degree quilt down to sub-freezing temperatures, super cold would start at sub-zero Fahrenheit.

For a jacket named after the incredible and infamous Fitz Roy mountain in southern Patagonia, it better be an amazing jacket. And it is. It fully lives up to the reputation of the wild mountain with 800 fill power down and weighs in at only 19 ounces for practically being another sleeping bag.

You won’t find a lighter down jacket for the warmth. Appearances are overrated; the trash bag appearance boasts incredible warmth, so much so that I hesitate to put it in the ‘milder’ category. Protip: get the hood. A fleece cap can’t come close to the warmth of an integrated down hood.

Indestructible and light. I wouldn’t use it for a base camp because of the lack of ventilation and smaller size but the internal two pole design and single wall makes it easy to pitch in gnarly conditions and pack up on a day to day basis. Remember to replace the cheap stakes that come with it for some  MSR Cyclone or Blizzard stakes. Protip: the fabric isn’t waterproof, if there is any chance of rain instead of snow, do not bring this tent.

I’ve always been amazed at the versatility of this seemingly fragile single pole tent. From the beaches of the Florida Keys to the gusty windswept fjords of Newfoundland, it’s managed to endure everything I’ve put it through. The double wall design keeps you dry on the inside and the vestibule allows for cooking in the comfort underneath the outer wall. Protip: because of the steeply sloping ceiling, this tent can handle large amounts of snow pack but beware of high winds because the single pole design will simply collapse.

Bomber. The only word to describe this sleeping pad. At over two pounds, it is a burden to carry but couple it with a thin closed cell foam pad and you’ll have the warmest night sleep of your life. Any temps above about 15ºF this is overkill but below that it is like sleeping on a warm cloud.

Unlike the Downmat, the Xtherm features radiated heat reflecting technology in lieu of insulation. While it’s R-value is 5.7 compared to the Downmat’s 8, it’s weight is less than half the downmat for nearly the same comfort. Unfortunately, the aluminized surface on the inside of the mat isn’t very durable, as noticed in Thermarest’s summer pad, the Xlite. Because of this, you should only expect to get a couple of winters out of this pad before it transitions to a summer pad.

While Enlightened Equipment quilts is always my go to, having a hood on a sleeping bag for the super frigid temps is a nice perk. I’ve used this bag comfortably down to -10ºF and I’m sure it could go even lower than that in a tent with a liner. Protip: if the temps drop well below zero, undo the zipper, curl up into the fetal position and use the bag as a quilt. If you try this with the zipper closed, you’ll put tension on the fabric and compress the insulation. Also, protect this investment with a liner and by keeping it clean. It’s the most expensive thing on this list.

I’m continually impressed by the versatility and quality of these quilts. Without question my favorite piece of gear on this list, the Enlightened Equipment Enigma is the only sleeping bag/quilt to actually understate its temperature rating. At a tiny 22 ounces, this quilt blows all similarly rated bags out of the water and is only a third the cost of the Marmot Lithium. Protip: pair the Enlightened Equipment Hoodlum with the quilt to get maximal warmth from your sleep system.

Typically when the snow disappears over windswept terrain and jagged rocks show from underneath, the hiker will need too remove their snowshoes to keep from breaking them. Not the Lighting Ascent. With full metal construction and no fragile tubes, these snowshoes can be kept on over any terrain. Incredibly bomber and versatile with front-point crampons and ability to add flotation tails, no other snowshoe can compete in my book. Protip: if there is ever any question of whether or not to bring the snowshoes on a trip, bring them. You won’t regret having the extra weight quite like you would if you spend the entire hike postholing.

I’ve had these things for seven years of winter backpacking without any sign of wear. Made of rubber and stainless steel, these crampons fit over nearly any boot and can be used for trail running and even in urban environments. Personally, I think everyone who lives in snowy areas should have microspikes for icy walks to work or class but the winter backpacker definitely should have a set. Functionally, they work nearly as well as rigid crampons on shallow grandes but on steeper terrain, you’ll definitely want to upgrade to 10 point crampons.