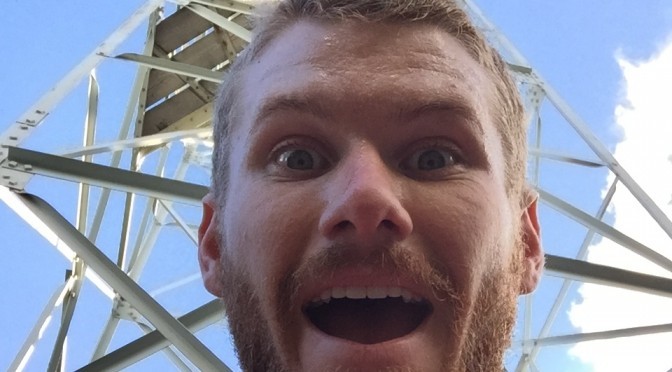 Eventually my stomach settled and the thought of continuing became less unbearable than the thought of stopping. That’s really all it ever was, never inspiration to continue, just dread at the thought of quitting my Appalachian Trail unsupported record attempt so early.

I sat for a while, staring at the crumbs of a Nature Valley Oats n’ Honey granola bar. I needed to eat. The trail was easy out of the shelter for a time but I was running on fumes. Standing was even a burden. I sat down on a bunk beneath a hiker who was doing a flip-flop hike, having started in New York, heading up to Katahdin, to get back down to New York and then hike to Georgia. He revelled at my tiny pack, not believing that I had hiked all the way from Katahdin with it. A girl sitting on the bunk next to me asked what was in it and I listed, “Enlightened Equipment quilt, Xlite sleeping pad, and cuben fiber poncho-tarp, and,” I thought for a second, “that’s pretty much it.” She was hiking the Long Trail was a Vermont local. I was exhausted and looked over at her and with utmost sincerity and sadness, asked “why does it rain so much here?”

That’s really all it ever was, never inspiration to continue, just dread at the thought of quitting.

The first part of the day was fantastic because section hikers crowded the trails. They were friendly and refreshing and reminded me why I was out here, because I absolutely love the woods. With each SOBO section hiker I passed, some who had left the shelter in the early dawn hours, they asked if I was the one who rolled into the shelter late last night. I felt bad and apologized but none were upset, simply amazed to see someone solo night hiking. I had to remind myself that it wasn’t a normal activity, not even for groups. Daylight is precious, but the concept of hiking in the thickness of the wooded darkness no longer intimidated me.

The whole concept of backpacking and hiking had been turned upside down to me. I saw one hiker struggling down the mountain with a lumpy fully loaded pack, a sure sign of impatience or poor packing, and asked “Goodness gracious my man, is there a body in there?!” He laughed and said it feels like it but for the next couple miles I sincerely wondered what the heck could’ve been in that bag. Another hiker asked me how far it was to the next shelter and I said instinctively, “Oh man it’s just up the trail, not far.” He asked if I knew the mileage and I realized it was probably 6-8 miles back, half a day’s hike for a lot of hikers. Another guy asked me where the next water source is and I said “Just down the hill, maybe 3 miles. Have a great hike!” and kept on without even realizing that 3 miles may be way too far for someone with limited water. Having hiked 12 miles with not a sip, I didn’t even consider it. A mile down the trail I felt like an ass for not offering him some of mine.

A short time into the day’s hiking I began to feel much better. My legs loosened up and the trails flowed underneath. I rocked out to some CCR and Clint Mansell and felt like I was going to salvage a solid day of hiking.

Late in the day I started my summit up Stratton Mountain. And for one of the few times so far on the trip, I felt like I was gliding up a mountain rather than crawling up it. The grade was gradual and the trail clean and clear. A few NOBO thrus barreled down the mountain likely racing the sun to Stratton Pond Shelter. We exchanged quick greetings, all of us in a bit of desperation with the clock ticking till darkness.

But up on Stratton Mountain, all my fear, all my concern for failure or sickness, injury or safety, for just a few minutes dissolved. I stood for a second at the base of the tower, reflecting on when I stood here in 2009. I remember grabbing at one of the supporting steel beams at the base of the tower. It was cold, in the teens, and my hands were numb. But I lightly brushed the beam, feeling the light fluff of frozen moisture on its side. I looked at the stairs, a sheet of ice covering each step. I couldn’t have gone up it, at least not safely. And on this day, I was in too much of a hurry and too tired to climb its flight. So instead I took a pic at the base. I love this mountain, I love this tower, and I love what it means. On this exact mountain’s summit, Benton MacKaye, while helping construct the Long Trail, thought up the crazy idea of creating a trail that stretched the length of the Appalachian Mountains. It was an absurd idea that led to many more absurd ideas, including this one. Most days I would curse his ambition and mine, but tonight I felt good, and I was immensely grateful he was passionate about the insane prospect.

I could hear a conversation over at the fire warden’s cabin and headed that way, hoping to slip by unnoticed. It was not meant to be; the caretaker shouted through his screen door asking me to hold up. I recognized him instantly. 6 years ago he had been up here, bundled up in the early chilly morning. He had the sort of tone that makes creates instant friendship.

He stepped out of his bedroom sized cabin and asking me about my hike. It was late but I didn’t mind. I craved friendship almost as much as food and sleep. His name is Hugh and his wife is Jeanne and they’ve been maintaining the cabin and the trails around it since 1996. I sat down on the ground and welcomed the conversation. I told him I was a SOBO thru-hiker and he acknowledged that I was the first southbounder. I told him how in 2009 I had been the last person attempting a SOBO thru-hike to come over this mountain. His wife smiled and without being critical in the least said, “We probably said, ‘he’s not gonna make it’.”

A couple of their friends from the Green Mountain Club were up spending a couple of days with them and came over. They said hello and went into the cabin to eat their dinner. But shortly after the gentleman came out with a tortilla with vegetarian refried beans, a dab of salsa, and a sprinkling of cheese. He didn’t even offer it, he simply gave it to me. It was heaven to me, a nice evening conversation, a downhill hike from here, and a warm, delicious meal in the company of new friends.

We talked for nearly half an hour as they continued to shower me with treats and interest in my life and my hike. We talked about medicine, and the health benefits of a life in the woods. We shared stories of life on the trail and they told me what it was like to live up in the cabin 6 months out of the year and about some of the hikers they had met. They told me how there was a time when the idea of a thru-hiker didn’t even exist. They recalled when they meet their first one. By comparison they had probably met a dozen of the fools today alone.

Eventually I thanked them for the meal and said goodbye. But not before I could leave, Hugh looked at me and said “If anyone breaks the record, it should be you.” He continued on to explain that he thinks someone who loves the woods like I do, someone down to earth should break it. It was praise that I’m not sure I deserved but was wonderful to hear. I smiled an ear to ear grin with confidence that I had been missing for quite some time now. With a full belly and a warm heart I said goodbye and got moving down the south side of the mountain.

I feel like I should close with this story. It doesn’t get much better than that. Life on the trail, whether trying to break a record, or trying to finish is riddled with grueling episodes of horrendous weather, crippling exhaustion, absurd hunger, and ridiculous tales that make normal life seem completely mundane. But out on the trail there is something called ‘trail magic’. I don’t think I’ve ever even heard it defined because to do so would limit it. But it is the sun splitting through the soaked leaves to warm your skin after days of rain. It is the pair of shoes in Gorham to replace my disintegrating pair. It is the kindness of a stranger wishing you good luck. It is a cooler of sodas just sitting out in the woods with the only request in return to sign a logbook so someone can vicariously live through your adventure. It is seeing a baby deer taking some of its first steps. It is turning a corner into an open view to lookout on the magnificent world below. And beyond any hospitality I ever could have imagined, it is the gentle refreshing kindness of Hugh and Jeanne up on Stratton Mountain.