Eating a small snack before getting to bed, I saw the brightness of a headlamp approaching. I got excited, thinking it might be my friend Bo, a NOBO thru-hiker whom I had known since elementary school. And sure enough he rolled in with a jump in his step like it was midday and not nearly 10pm. He said hello to the other hiker sitting at the picnic table outside of the shelter and I recognized his voice right away.

He looked in the shelter with his headlamp in confusion, thinking I was at the shelter 5 miles north of here. He scanned me with the bright beam before realizing who I was. Out here everyone calls each other by their trail names. His was Typo, so he couldn’t imagine who would be calling him by his real name.

He returned the excitement and we caught up for nearly an hour. We talked about each other’s hikes, about what we have been doing since college. We had been rivals in track in high school and we reflected on some of our meets against each other. He always whooped my butt but I enjoyed a good challenge so always set him as my target. And after moving out of Richmond, we both attended Virginia Tech. It was really fantastic seeing him and I was so happy to meet up at a shelter rather than out on the trail where I’d probably only be able to share a short greeting before racing on.

He generously shared some trail magic he had picked up down the trail and after eating the small snack we hit the sack. I woke up just after the sun rose, having vowed to sleep in an extra hour whenever I rolled into camp late the night before. We got a quick picture of the two of us and then I headed on south toward Georgia.

Down the trail a few miles I met a nice mom and daughter duo trying to hike the AT supported in under 100 days. I was sitting on a rock, drenched in the morning humidity, eating an entire bag of oreos in one sitting when they rolled up. They were very nice and excited about their trip and mine which was a much needed morning pick-me-up.

I had come to accept that I often didn’t look much like I was attempting a record. Sometimes people would catch me sprawled out on the trail, poles still in my hands, pack still strapped to my back, looking like someone had shot me and left me to die. Sometimes in the early morning I felt so drained that I nearly ate my entire food stash in one sitting. And on top of that, I was carry a running vest which might as well have had urban day hiker gear junkie written all over it, not ridiculous minimalist mountain man. People seemed to expect me to be in an outright rush all the time. But for a trip so long, it was impossible to be stressfully racing all the time. Sometimes, I’d get really hungry and tired and sit on a rock and eat four bags of skittles. Sometimes I’d lay down for a 30 minute nap in a shelter. And frankly it’s not only okay but necessary to do that on a fastpacking trip of this length.

Down the mountain a ways there were beautiful clouds floating in the valley that made for some extraordinary views. At this point I was on something like my sixth audiobook and was beginning listening to Game of Thrones which I was quickly realizing is everything it’s been hyped up to be. It was great listening, but almost too engaging for hiking and I soon switched back to music, 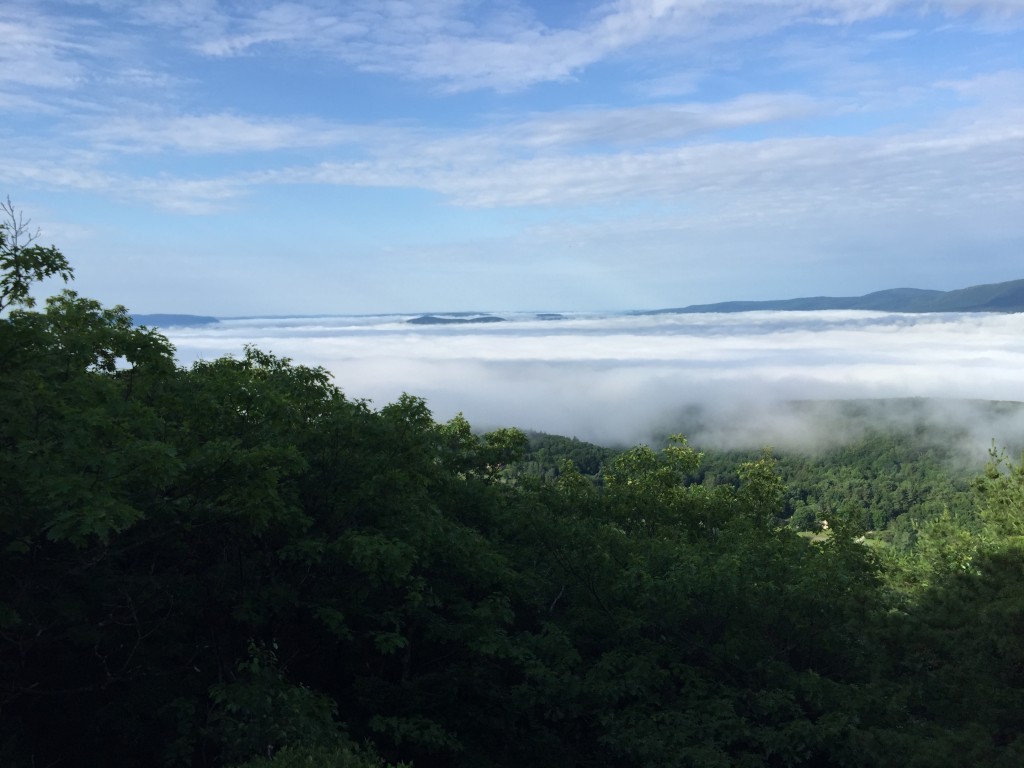 Early in the afternoon I began my ascent up Mt. Everett. Working my way up the more gradual slopes at the base a storm rolled in and poured on me for over an hour. Business as usual at this point and I didn’t really mind it too much. The day was hot and the air muggy and beginning the steep climb I was drenched in my own sweat anyway; it was more a free rinse than anything else.

I was warned about the climb up Mt. Everett by some NOBOs. They came walking up to me with a look of exhaustion on their faces and exclaimed how gnarly the descent was. It’s an understandable sentiment to express but I was getting very tired of hearing it. I never really knew how to respond. Like I would just go, “Oh is it? Oh man. Maybe I shouldn’t do this then,” and turn around and head home. Like “Oh thanks for the warning, I’m going to take the next mile to get emotionally prepared for it.” Like I said, I can understand people saying it, and normal Grayson wouldn’t have thought twice about it. But this wasn’t normal me. This was exhausted me who really didn’t want to know what the next section of trail was like. It didn’t make a difference to know, so I was happy being ignorant.

It was a tough climb, I’ll give it that. But nothing worse than anything up north that I had already done. The descent was hairy and some more NOBOs spoiled the surprise and warned me about the upcoming climb up Bear Mountain just across the Massachusetts-Connecticut border. So instead of my usual polite response of, I responded with, “Yep. That’s what all of north New Hampshire and south Maine is like.” The NOBOs hadn’t hit too many gnarly climbs and descents at this point but they’d handle the Whites just fine, and I knew that. But I was tired of the spoilers of the upcoming trail so I dropped that bomb like they were going to die as soon as the stepped foot into New Hampshire.

I crossed into Connecticut, and near instantly started working my way up another beast of a climb, Bear Mountain, the highest summit in Connecticut. The slick rock made it a pretty hairy climb but I was numb to giving a crap at this point so I just did my thing.