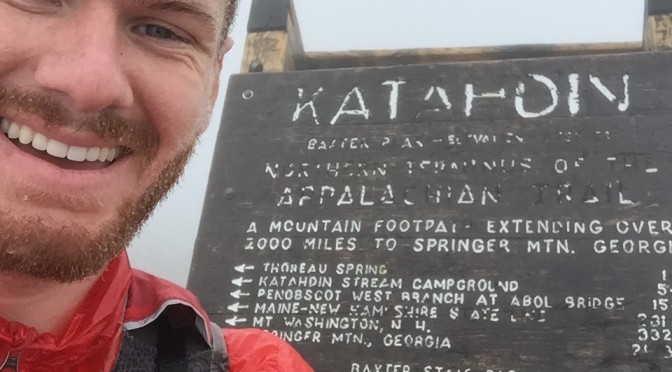 I was heading deep into the heart of rugged Maine with only 3.5 pounds of gear, and the weather was going to test it all right out the gate.

I checked in at the Ranger Station. He asked if I needed a camping reservation and I said no, I would be hiking the 20 miles necessary to get out of the park that day. In fact, I would be hiking much further than that. My excitement for the trip apparently wasn’t contagious because the ranger gave me a very stern lecture on the rules of the park which I was already well acquainted with from my preparation.

Climbing Katahdin, the highest mountain in Maine, which the AT ends on top of, is a feat in and of itself. It’s a brutal climb, the longest on the entire 2180 mile trail, and strewn with massive rocks and boulders. It is as much a test of arm strength as of legs because of the scrambling and climbing.

I said thanks to Ole Man and began my climb at 730am. The rain worsened and I was soaked through my poncho, but warm. My dad had attempted the climb with me in late August 2009 when I came up for thru-hike attempt round 1 so it was odd and frankly lonely not starting this trip with him. But this was an unsupported hike, a solo endeavor. As the climb steepened and the rock scrambles began I thought there wasn’t any way it could get much worse. Apparently I had blocked the difficulty of the climb out of my memory because it got much worse.

I thought on my way up that it would’ve been smart to have waited a day and avoided the torrential rain, but the forecast for rain held for the rest of the week and I didn’t have time for that. I summited Katahdin in the clouds at 9:50am, took a selfie for proof, took a screenshot of the GPS on my phone, and promptly began my descent to stay warm. No views to admire, no one else up there, high winds, no real reason to stick around. The rain had let up so now it was just the wind that I had to contend with, the kind of wind that if you’re not careful will turn you completely around mid step. 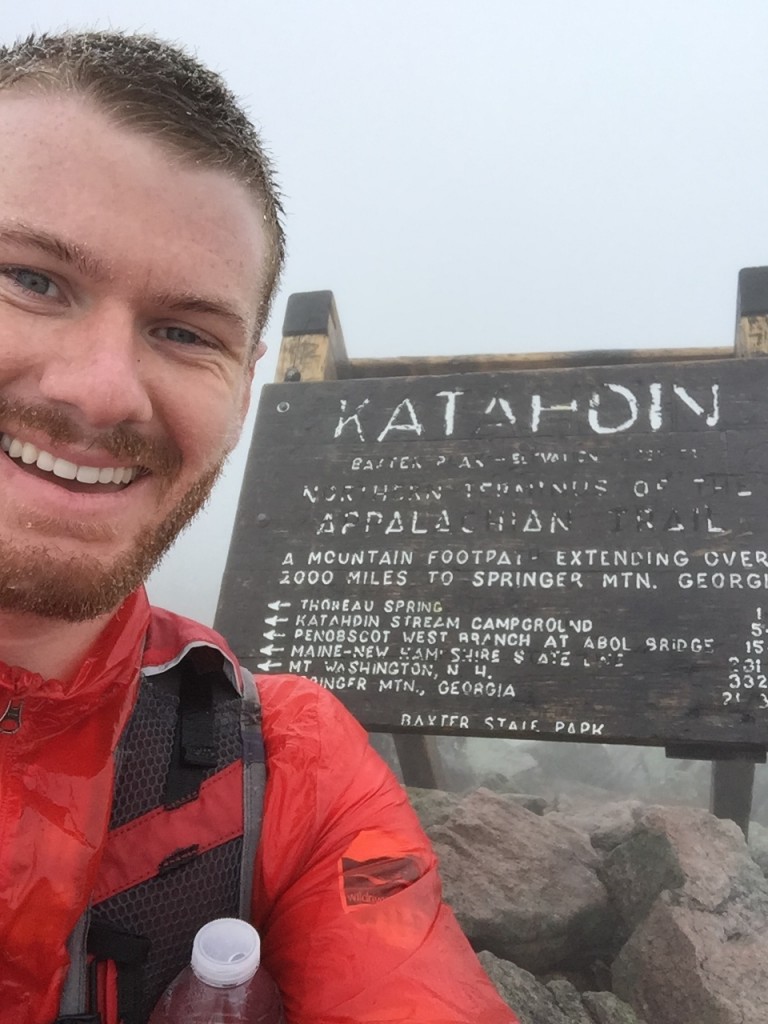 I started seeing the other people beginning their thru- and section hikes on my descent and wished them the best of journeys. There were several SOBOs beginning the adventure of a lifetime up here today and I envied the naivete and excitement they all had. In 2009 when I came up here I had little backpacking experience. I had read the books, studied the maps, and thoroughly planned my gear. But for the stuff like bear bags aren’t really necessary until Virginia, or that your feet will always hurt, or that rain jackets aren’t to keep you dry but simply warm, I didn’t know any of that. I was a kid in the woods on a grand adventure and I would never feel that sort of unfettered excitement again.

So I envied the new guys, the ones stepping foot on the AT for the first time, carrying a huge knife, with their swollen packs and extra outfits, who worked to gather wood and make a fire every night. The excitement of a new backpacker is one of the main reasons I love coming out here.

Down below tree line I was warm again and into the easier part of the descent. My shivering slowed and eventually stopped. No better way to start off an adventure than with some violent shivering.

I picked up my food and gear down at the ranger station and began the 10 mile stretch to get out of Baxter State Park. The ironic reality is that the longest sustained climb on the entire trail is followed by one of the flattest stretches. I cruised out of the park, and in the cool air and rain, worried little about the mosquitoes and blackflies which normally cloud the air this far inland in Maine.

When I made it the Abol Bridge store to begin my first resupply and replace a portion of the calories I had lost already from the first 20 miles, the rain had returned in earnest. I ate as much food as I could, grabbed some candy bars, and entered the 100 mile wilderness, the longest stretch without resupply on the entire trail. My pack straps stretched from the heaviest load it had ever seen and would ever see. But it was still a meager weight compared to most thru-hikers. Hell, even most day hikers carry more. Full of four days of food and water it weighed a mere 11.5 pounds, less than a third of the weight I was carrying coming into this stretch 6 years ago. The prospect of surviving off this was daunting. I had tested my gear and knew my food rations well, but it’s so far removed from the standards of normal backpacking that it still made me cautious.

Throughout my trips people have expressed envy at my tiny pack, noting the grueling weights they carried. But no one ever envies going hungry, or being wet and cold, or sleeping uncomfortably. To me the sacrifice is worth the reward of being able to travel quickly and with ease, but it’s certainly a trade-off.

I continued hiking for another 15 miles while the rain let up and made it the Rainbow Stream Lean-to at 830pm. The 6 person shelter was crowded with 7 sleeping SOBO thru-hikers so I would tarp camping for the first night out. A few of them woke up to say hello but quickly went back to sleep. I made it about 35 miles for the day which included the hardest climb on the entire trail and 30 trail miles total because of the 5.2 just to get the start. It had taken me 3.5 days to get to this point in 2009. It was totally unreal to be here so quickly this time around.

The night was uneventful with the exception of waking up with a hungry mouse chewing crumbs from my mustache, the second time that has happened to me in these woods. It rained most of the night but I stayed dry under my tarp. In the morning the other hikers came over as I tore down “camp” which simply consisted of a groundsheet and a tarp. They needed to see it again to realize that the hiker with a purse size pack wasn’t a collective dream they all had. They couldn’t believe I had started just the day before, and they couldn’t believe my gear. And to be perfectly honest, I couldn’t either. But they wished me the best of luck and I wished them the same. I halfway envied their trip, a relaxing hike with friends. But I had done that already, this trip was a physical challenge. 5am start, ready to rock and roll.