With a solid training week coming to a close and preparations reaching a lull, I wanted to take a moment to review a piece of gear that is going to be invaluable to me on my upcoming Appalachian Trail self-supported record thru-hike attempt, my Enlightened Equipment 50 degree Enigma quilt. 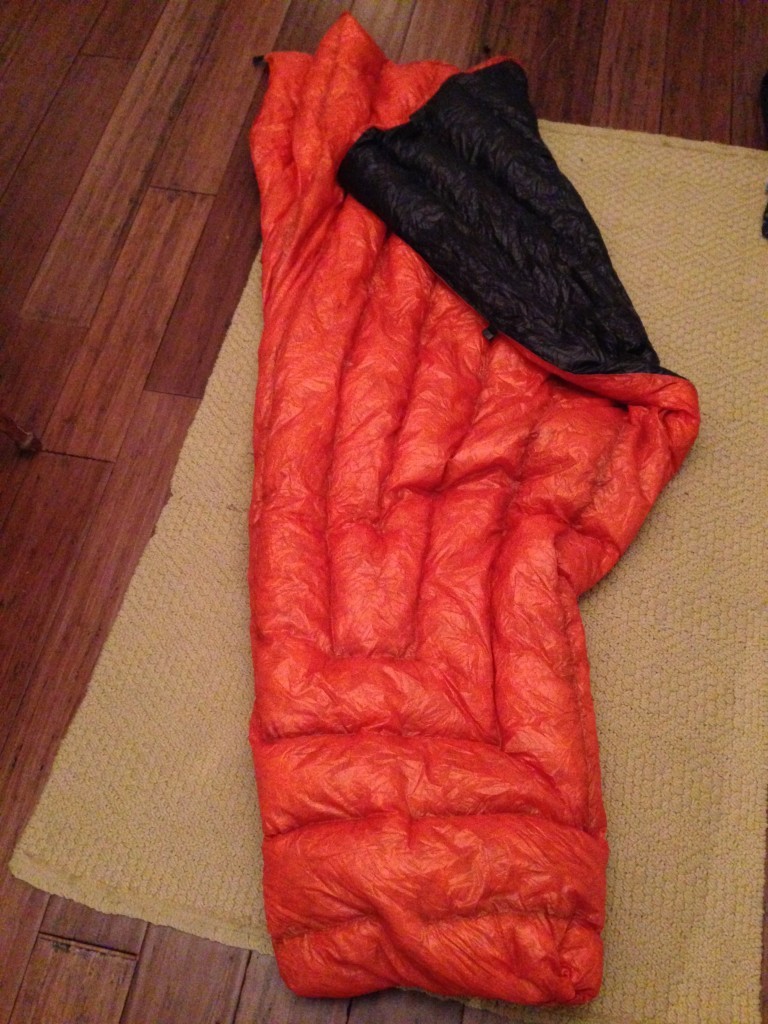 To give some background, a quilt is similar to a sleeping bag, except sports a simpler, more efficient, and lighter design. While a sleeping bag wraps all the way around you, a quilt maximizes the insulation by only covering above you and letting the sleeping pad take care below. They usually come without a hood or with a detachable one. To most new backpackers they’re daunting for their simplicity in the same way that new hikers flock to tents over tarps. Unfortunately this kind of misunderstanding really halted the quilt’s progression as an innovative piece of backpacking gear. For years quilt companies simply didn’t have access to the top fabrics and were way behind the field in design. The fully enclosed counterparts were often lighter despite being fundamentally inefficient.

When I started checking out the market for new, lighter gear to replace my battered gear from my previous trips, I was elated to find Enlightened Equipment leading the way in lightweight sleep systems. Their 10 denier nylon fabric matched that of the outdoor gear giants and the option for 800+ fill down showed their dedication to using the highest quality materials for their quilts. I continued my search for competitors to make sure EE was truly the best and nothing came close. There was no getting around it, I needed an Enlightened Equipment quilt for my hike and to carry anything else would put me at a disadvantage from the gun. END_OF_DOCUMENT_TOKEN_TO_BE_REPLACED

Chris McCandless showed the world a way of embracing life that most of us did not understand. On his journeys he  helped people love and feel and live the way humans were meant to. So many things blind us from those three fundamental elements but Chris taught the world to open our eyes. But Chris taught without preaching. He enlightened us by doing it himself. And although he made some mistakes, his goal was righteous and the following is true.

Chris lived for 24 years. That is more than most people can say at their deaths even after eighty years of so-called living. We fall into a pattern and although that routine and schedule might lead us from our dream, we keep following it because its easy.

My senior year of high school I declared that I was going to take a year away from a classroom. I was going to break that routine and follow my overwhelming deep desire. But all my friends were going to college. Everyone was following that path and while watching the ease of their way, I was reeled into the routine again. Birth, day care, elementary school, middle school, high school, college, job, retirement, death. That routine was so easy and so enticing for me.

So I thought, maybe I would like college. Turns out I don’t and didn’t, but understand the necessity of such an evil. I thought, what’s another year? But that extra year in school pushed me over the edge.

I will set out on my great adventure to on August 22. Instead of Alaska, I will struggle alongside nature in Maine. Chris died because of a technical mistake, not because his ideals were whack. I hope to not make any technical mistakes, but life has a way of making even the most detailed plans and preparation near worthless.

Only a handful of people have hiked the entire 2,178 trail from the North to the South. Much, much less have hiked the trail in the winter. I prepare myself with reading, experimenting, and conversing with more knowledgeable hikers, but nothing can prepare me physically, mentally, and emotionally for the struggle I am about to endure.

On August 22nd, 2009 I will began my attempt at a southbound winter thru-hike of the Appalachian trail.