Last Saturday a few friends and I completed the four-state challenge which entails walking from Pennsylvania, through Maryland, through West Virginia, and into Virginia on the Appalachian Trail. A year ago this December I attempted the challenge and having not seen a soul for over 24 hours, with a dead headlamp, frozen fingers, and sore feet, gave up just a few miles from Harper’s Ferry, West Virginia.

This year, we camped in Pen Mar park on the Pennsylvania-Maryland state line on Friday night. The four of us had driven up after class. Three of us would hike in the morning and one of our friends came along to support us.

We arrived late in Pen Mar Park and I was absolutely overwhelmed with emotion. I realized it meant so much to me because a year ago, I had walked here. My parents had driven me to Millinocket, Maine, dropped me off and had driven home. And I walked over 1100 miles to this spot. It seemed so surreal. It sealed for me that my Appalachian Trail thru-hike attempt didn’t occur in some imaginary foreign world. You could drive here to this place, but I had walked, and to me that was pretty cool.

The next morning at 3:30 we rose and prepped for our trip: a fourteen hour hike. Fitz took care of Paulo, my Siberian husky buddy while we hiked and met us at road crossings to feed us and give us much needed support hugs. We walked into the woods a little before 4:30AM and as we approached the first road at mile 6, we claimed “Wouldn’t that be sweet if Laura is here?” And on her A game as usual, there she was sitting in the car just down the hill on the side of the road. We stopped for minute to refuel and warm our hands and then were swiftly back into the woods. 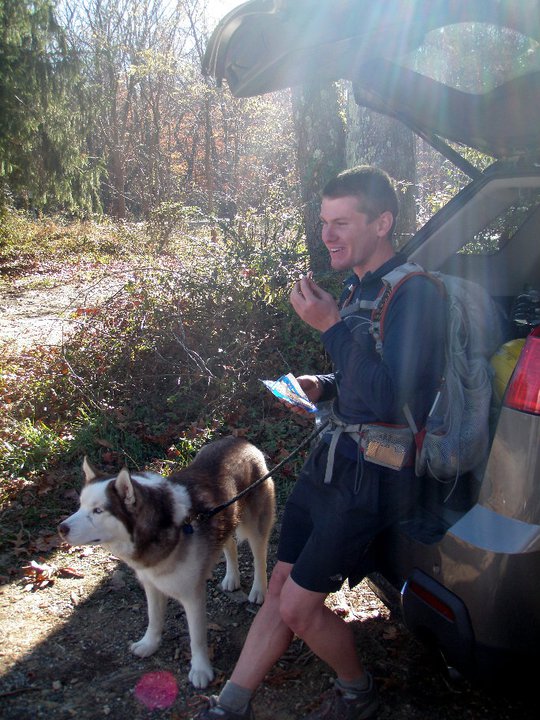 We quickly split up recognizing our different paces and regrouped at mile 20 where I found Laura and Paulo waiting for me with a warm embrace from Laura and a slobbery lick on the face from Paulo. 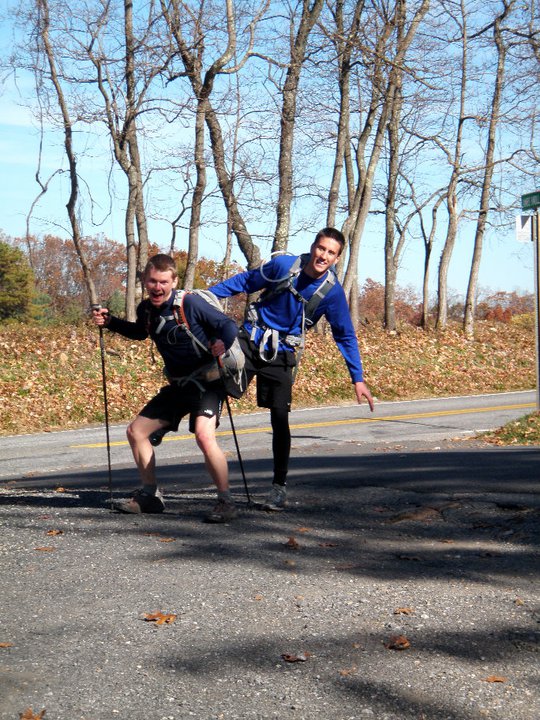 As we started nearing Harper’s Ferry the pain became overwhelming. We hit the C&O towpath at sunset and continued after a quick snack with Laura. I could not reinforce to her enough how much it meant to see her face at each road crossing. She would look at us and smile and laugh and the nagging pain in my feet would dissolve. Despite being in extremely good hiking shape last year, this “Maryland challenge” attempt was drastically easier just because of the friends that did it with me. I hardly even noticed the miles tick by until the very end. 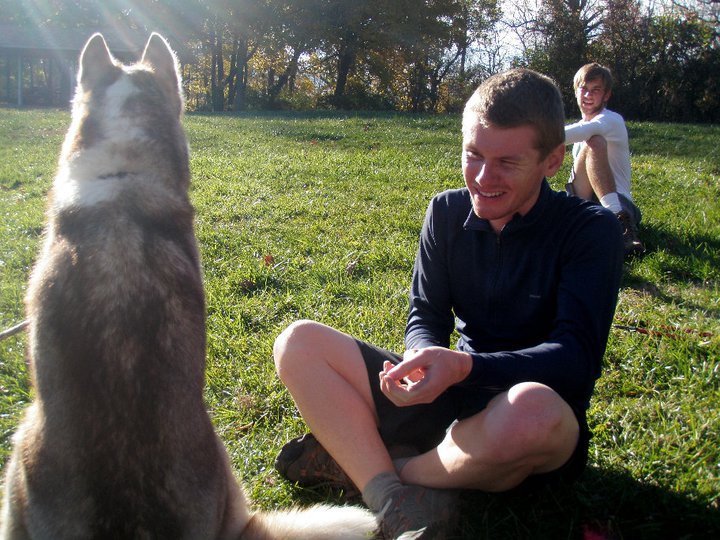 A half-mile into the darkness of the tow path we stop walking when Scott says “There are eyes up the trail.”

Zach shoots his headlamp up the trail as I say “It’s probably a person.”

I turn on my headlamp emphasizing the unlikelihood of a bear being on one of the most populated paths on the east coast. “Guys, its a dog.”

We walk further on the trail and just as we are about the pass the silent dog owners, blankly staring at us, the man says in a soft, creepy voice straight out of “To catch a predator”, “You’re lights are very blinding.”

Without a word, Zach and Scott lifted the pace to a near run to escape the creepy stranger. They were paces ahead of me as I fell off, struggling to stay upright while laughing hysterically. It was not until after their blood pressure and heart rates dropped that they began to appreciate how funny the situation was and slowed the pace down a bit.

We reached Harper’s Ferry and then soon reached the Virginia state line having accomplished “The Four State Challenge.” After 44 miles of hiking, Scott and Zach had not had enough. They went on hiking for another 9 miles to make their total 53. I sat in the car with Laura as she conversed and I, half asleep, rambled and struggled to put a sentence together.

“Poptard. Look at the stars. You know what’s cool? Each one of those has a planet. And several of those have life on them. It’s not even a question. It’s a certainty,” I told her in my delirious tone.

“Let’s call my mom!” I excitedly said as if I were a sorority girl drunkenly calling everyone in my contacts. As the phone rang to her voicemail I was somewhat happy that my mom did not hear me in my state of mind.

“Let’s call my dad!” I said just a few seconds after deciding against leaving my mom a distorted message. I once again got a break when my dad’s phone rang to his voice mail.

Zach and Scott arrived at the car around midnight and we made a beeline to the nearest 24 hour restaurant which happened to be Waffle House. We walked into the diner like geriatrics who needed to change their Depends, establishing a pact that if we feel like this when we are ninety then we’re going to bail on life. Every spot on my body was sore. My feet felt as if someone had bashed them with a sledgehammer for fourteen hours. While we ate, Scott reached up toward his face satisfy an itch, scratched the air, then put his hand down. We were tripping on endorphins and delirium but our waitress thought she was dealing with the normal drunken group that comes to Waffle House at midnight.

We went on to a Comfort Inn motel nearby to stay the night. We got our room and started getting ready for bed. Scott went to the bathroom and walked out from a stopped up toilet. The toilet hadn’t even made an effort to flush. So I went to the hotel owner, knocked on his door and told him about the toilet. He came into the room and fiddled with some knobs that did absolutely nothing to fix anything. He says, “It works fine. It just takes a while.” Mind you the original post-waffle house bowel movement is still in the toilet staring at us all like some beast from diner hell.

“Its not fixed, it hasn’t even flushed yet,” I responded with frustration.

We all came to an agreement that it was much more worth our while to bail and figure something else out than to “hold it” and sleep in the dumpy hotel. I asked the owner for a refund and he proceeded to lecture me on how he’s going to rent the room out that night despite it being nearly 2am. “Its fine that you go. I’ll rent the room out. I promise you. Somebody will come tonight. I’ll rent the room out,” he ranted for minutes.

“Dude, I don’t care if you rent the room out. You won’t rent it out but whatever. Just give me my money back so we can go.”

The hotel owner like some four year old at preschool stormed out of our room and came back a minute later with a vacuum cleaner. He plugged the vacuum in and Zach looked at him in a dazed stare. “Man, you’re being a bad customer.” Scott and I silently cheered Zach on without realizing his mistake.  “Wait. No, this is such bad customer service,” he corrected himself.

Meanwhile Laura’s getting the hell out of there to avoid the inevitable argument between two people with the combined brainpower of a seizing lemur.

The owner looks at him and says “Go ahead, unplug it.”

“No. I’m not going to do what you tell me to do!” he responded in the most accurate impression of a whining toddler he has reenacted since he was in preschool.

“Dude, give me my freaking money back now. You’re not going to rent this room out. It doesn’t matter if it’s clean,” I say to him. It was two in the morning in the butt crack of West Virginia in the dumpiest, most overpriced motel. If he knew he’d rent the room out then he wouldn’t have been so upset at losing his profit from a few college students.

When I finally did get my money back, I walked out and with the most enthusiasm my fatigued body could muster, cursed, “Screw you man.”

I turned around and the best I could produce as Scott shut the door behind us was, “Dude, there are only four of us!”

And with that adventure, Laura drove us all the way back to Blacksburg, being the biggest trooper and most caring person in the world that night. We made it to my house and crashed on sofas and air mattresses and didn’t wake until 3:00pm on Sunday.

Every weekend since I started classes I have had an adventure and finally now it is wearing on me. I am so glad that school is off for the next ten days so I can get some much needed R&R. On my list of things to do:

Hang out in non-physically stressful ways with my other stranded friends.

One thought on “The Four State Challenge”