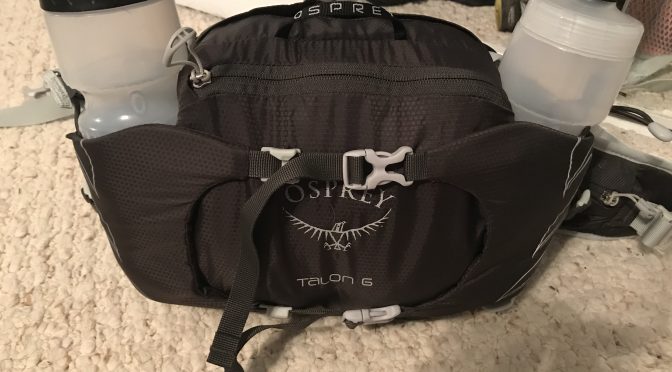 I’ve been working on a new fannypacking gear list I’d like to try out. I’ve been interested in the idea of ditching the backpack in favor of the shoulder-strapless fanny pack. My thoughts were that my loads under 5lb base weight were just light enough to not necessitate a hipbelt on my packs, but not quite light enough to be comfortable with all the weight on my shoulders for 40+ mile days. I also wondered about the increased freedom of no shoulder movement inhibition, the better breathability, the easier access to storage, and maybe even better protection against bouncing during running stretches. Hence my fanny pack gear list.

But switching to fannypacking isn’t the only thing I’ll likely be trying out on my next trip. I’m considering ditching the ground sleeping in favor of a hammock setup. Every time I’ve revisited the hammock vs ground sleeping debate I’ve always found that the sleeping pad, quilt, tarp combo is, without question for any given temp, always lightest. But after a hellish night on the Appalachian Trail in Georgia a couple summers ago where I got mauled by bugs and was sweating buckets trying to hide under my quilt I think I may give the increased airflow of a hammock another thought.

For now I’m considering going with the Opsrey Talon 6 lumbar pack (fannypack) with a small stuff sack strapped to the top of it. I couldn’t quite fit everything into the pack and the Talon 8 is no longer being made (if you have one you want to sell, let me know!).  So maybe I’m using 7 liters when it’s all said and done. It’s definitely a step down in storage from my 10 liter Salomon pack but I think I may be able to get away with it, especially on shorter summer trips.

For the hammock I just bought the ENO sub-7 hammock for some absurdly cheap price at REI. I’m going to see how light I can pare it down to ditching the stuff sack and the biners if I can but with my limited knowledge of hammocks, and by limited I mean zilch, zero, nada, I’m certain I’ll probably go stupid light and screw something up. But for now without the stuff sack and the biners I’ve dropped it down to 4.92oz. Not too shabby. Add a couple ounces on for some tree straps and that’s a pretty light rig.

Can’t imagine a real need for the biners other than ease of setup but need to rig up my suspension system to see if I can pull it off. My plan was to ditch the sleeping pad (thermarest xlite) at 7.4oz and decently bulky hoping that the little bit of extra ounces I might gain will help me with my lack of storage space. And then from a comfort factor, it’d be nice to not sleep on the ground with creepy crawlies and maybe the hammock will help keep me cooler on some of those scalding summer days down here. We’ll see how it plays out.

Thinking about some other mods to really pare this thing down into a disgusting minimalist setup, I was pondering the idea of ditching the tarp in favor of a simple polycro groundsheet as shelter. It seems like a terrible idea considering the tarp was my rain gear and shelter but alas, I’m not full of many great ideas after all. I’ll have to give it a go at some point and see how it plays out. Probably will ditch a bunch of stuff that I carried on the AT in 2015. Not going to carry a stuff sack for food, or the extra 2L platypus bottle for water storage. If the weather is looking to stay above 50 degrees or so, I’ll more than likely just ditch the puffy jacket too. Damn this is looking to be a good fannypacking list! I’m excited.

On second thought, I should probably keep the tarp, for shelter and all (details). Maybe. I don’t know. We’ll see. I’ll probably just ditch it. Hell, might even ditch the quilt if I’m feeling extra masochistic. No, ditch the groundsheet, not the tarp. Derr, that was dumb.

For everything else though, pretty much keeping it the same. Water storage might change a little bit. Thinking about filling one of the water bottles with granola or some loose stuff I can pour instead of water, at least for the first day or so out of a resupply. It’d be nice to drop this whole system down in the 2lb range but we’ll see.

All units are ounces unless stated otherwise.