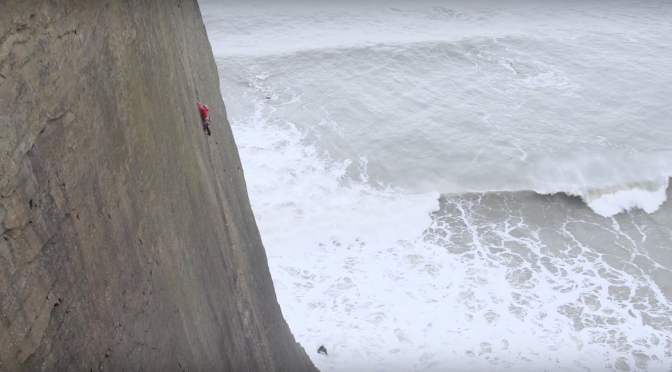 Pamela Shanti Pack doing what she does on Moab off-widths. “Really glad I didn’t die on that.” Lol what?!

Awesome video with his post-send commentary as the video rolls of him progressing up the wall.

Another series of crazy anti-drag maneuvers with Lee Cossey working his way up “Agent of Cool”. A beautiful line with super steady climbing.

5. Jason Kruk on “Boogie til you puke”

An all time classic. “I guess if you climb enough off-widths, one of these days you’re gonna get your knee stuck and shit your pants. It’s just an odds thing, really.”

6. Hazel Findlay on “Once upon a time in the southwest”

Second showing of Hazel Findlay on this list and the second feature of Dyers Lookout wall in England. “At half height you have to run it out a little bit. And that feels kinda cool cuz you’re not hindered by placing loads of shit gear all the time.”

Steph Davis crushing it on one of the dream walls out in Colorado, free soloing The Diamond on Longs Peak with a wild soundtrack.

“It’s just kind of weird helping your friend do something that you know could potentially lead to his death.” Beautiful video of Alex Honnold free-soloing in El Potrero Chico, Mexico with assistance from the amazing Cedar Wright.

10. Siebe Vanhee and Sean Villanueva on Tsaranoro massif in Madagascar

“Then you have to organize the bags. Again. It’s always better to do it in your underwear. Now we can commit to the unknown of this vertical ocean and go where no human has ever been.” Crazy dudes.

11. Dean Potter on The Nose of El Cap

I love the imagination and guts it takes to solo rock climb and Dean Potter shows the crazy crap it takes to race up El Capitan alone. An antique video at this point but still amazing to watch.